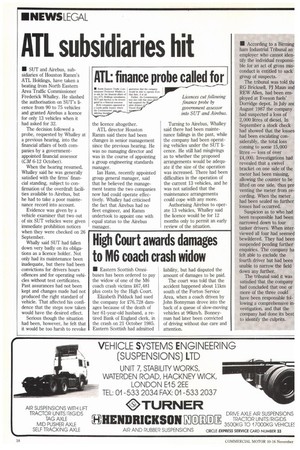 Page 16, 10th November 1988 — ATL subsidiaries hit
Close
Noticed an error?
If you've noticed an error in this article please click here to report it so we can fix it.
Keywords : Business / Finance

• SUT and Airebus, subsidiaries of Houston Ramm's ATL Holdings, have taken a beating from North Eastern Area Traffic Commissioner Frederick Whalley. He slashed the authorisation on SUT's licence from 90 to 75 vehicles and granted Airebus a licence for only 13 vehicles when it had asked for 32.

The decision followed a probe, requested by Whalley at a previous hearing, into the financial affairs of both companies by a governmentappointed financial assessor (CM 6-12 October).

When the hearing resumed, Whalley said he was generally satisfied with the firms' financial standing, subject to confirmation of the overdraft facilities available to Airebus, but he had to take a poor maintenance record into account.

Evidence was given by a vehicle examiner that two out of six SUT vehicles were given immediate prohibition notices when they were checked on 26 September.

Whally said SUT had fallen down very badly on its obligations as a licence holder. Not only had its maintenance been inadequate, but there had been convictions for drivers hours offences and for operating vehicles without test certificates. Past assurances had not been kept and changes made had not produced the right standard of vehicle_ That affected his confidence that the steps now taken would have the desired effect, Serious though the situation had been, however, he felt that it would be too harsh to revoke the licence altogether.

ATL director Houston Ranun said there had been changes in senior management since the previous hearing. He was no managing director and was in the course of appointing a group engineering standards manager.

Ian Hann, recently appointed group general manager, said that he believed the management teams the two companies now had could operate effectively. Whalley had criticised the fact that Airebus had no fleet engineer, and Ramrn undertook to appoint one with equal status to the Airebus manager. Turning to Airebus, Whalley said there had been maintenance failings in the past, while the company had been operating vehicles under the SUT licence. He still had misgivings as to whether the proposed arrangements would be adequate if the size of the operation was increased. There had been difficulties in the operation of the current 13 vehicles, and he was not satisfied that the maintenance arrangements could cope with any more.

Authorising Airebus to operate 13 vehicles, Whalley said the licence would be for 12 months only to permit an early review of the situation.