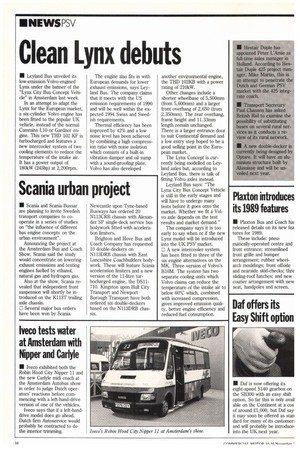 • Scania and Scania-13ussar are planning to invite Swedish transport companies to cooperate in a series of studies on "the influence of different bus engine concepts on the urban environment".

Announcing the project at the Amsterdam Bus and Coach Show, Scania said the study would concentrate on lowering exhaust emissions and testing engines fuelled by ethanol, natural gas and hydrogen gas.

Also at the show, Scania revealed that independent front suspension will shortly be introduced on the K113T trailing axle chassis.

Brighton and Hove Bus and Coach Company has requested 10 double-deckers on N113DRB chassis with East Lancashire Coachbuilders bodywork. These will feature Scania acceleration limiters and a new version of the 11-litre turbocharged engine, the DS11710. Kingston upon Hull City Transport and Newport Borough Transport have both ordered six double-deckers based on the N1I3DRB chassis.