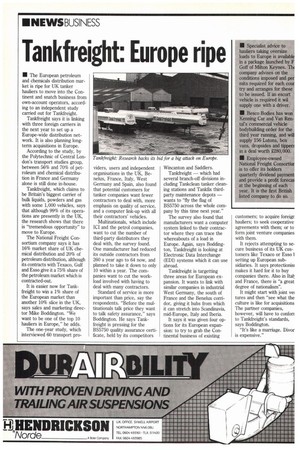 Page 10, 10th November 1988 — Tankfreight: Europe ripe
Close
Noticed an error?
If you've noticed an error in this article please click here to report it so we can fix it.
Keywords : Gas Stations, Chevron Corporation, Texaco, Mergers And Acquisitions

• The European petroleum and chemicals distribution market is ripe for UK tanker hauliers to move into the Continent and snatch business from own-account operators, according to an independent study carried out for Tankfreight.

Tankfreight says it is linking with three foreign carriers in the next year to set up a Europe-wide distribution network. It is also planning longterm acquisitions in Europe.

According to the study, by the Polytechnic of Central London's transport studies group, between 56% and 70% of petroleum and chemical distribution in France and Germany alone is still done in-house.

Tankfreight, which claims to be Britain's biggest carrier of bulk liquids, powders and gas with some 1,000 vehicles, says that although 99% of its operations are presently in the UK, the research shows that there is "tremendous opportunity" to move to Europe.

The National Freight Consortium company says it has 16% market share of UK chemical distribution and 20% of petroleum distribution, although its contracts with Texaco, Gulf and Esso give it a 75% share of the petroleum market which is contracted-out.

It is easier now for Tankfreight to win a 1% share of the European market than another 10% slice in the UK, says sales and marketing director Mike Boddington. "We want to be one of the top 10 hauliers in Europe," he adds.

The one-year study, which interviewed 60 transport pro viders, users and independent organisations in the UK, Benelux, France, Italy, West Germany and Spain, also found that potential customers for tanker companies want fewer contractors to deal with, more emphasis on quality of service, and a computer link-up with all their contractors' vehicles.

Multinationals, which include ICI and the petrol companies, want to cut the number of third-party distributors they deal with, the survey found. One manufacturer had reduced its outside contractors from 260 a year ago to 64 now, and planned to take it down to only 10 within a year. The companies want to cut the workload involved with having to deal with many contractors.

Standard of service is more important than price, say the respondents. "Before the multinationals talk price they want to talk safety assurance," says Boddington. He says Tankfreight is pressing for the BS5750 quality assurance certificate, held by its competitors Wincanton and Saddlers.

Tankfreight — which had several branch-off divisions including Tankclean tanker cleaning stations and Tankfix thirdparty maintenance depots — wants to "fly the flag of BS5750 across the whole company by this time next year."

The survey also found that manufacturers want a computer system linked to their contractor where they can trace the whereabouts of a load in Europe. Again, says Boddington, Tankfreight is looking at Electronic Data Interchange (ED!) systems which it can use abroad.

Tankfreight is targetting three areas for European expansion. It wants to link with similar companies in industrial West Germany, the south of France and the Benelux corridor, giving it hubs from which it can stretch into Scandinavia, mid-Europe, Italy and Iberia.

It says it was given four options for its European expansion: to try to grab the Continental business of existing customers; to acquire foreigr hauliers; to seek cooperative agreements with them; or to form joint venture companies with them.

It rejects attempting to secure business of its UK customers like Texaco or Esso 1 setting up European subsidiaries. It says protectionisi makes it hard for it to buy companies there. Also in Ital: and France, there is "a great degree of nationalism".

It might start with joint ye: tures and then "see what the culture is like for acquisitions The partner companies, however, will have to conforr to Tankfreight's standards, says Boddington.