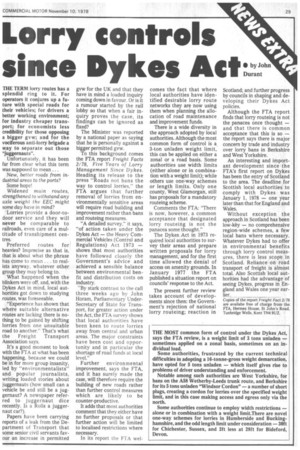 THE TERM lorry routes has a splendid ring to it. For operators it conjures up a future with special roads for their vehicles; for drivers a better working environment; for industry cheaper transport; for economists less credibility for those opposing a bigger gvw; and for the vociferous anti-lorry brigade a way to separate out those 'juggernauts".

Unfortunately, it has been far from clear what this term was supposed to mean ...

New, better roads from industrial areas to the ports?

Widened main routes, strengthened to withstand any axle weight the EEC might some day have in mind?

Lorries provide a door-to. door service and they will never be comparable to railroads, even care of a multitude of transhipment centres.

Preferred routes for heavies? Imprecise as that is, that is about what the phrase has come to mean . . to realists anyway, whatever other group they may belong to.

What happened when the blinkers were off, and, with the Dykes Act in mind, local authorities got down to studying routes, was foreseeable.

"Experience has shown that where suitable alternative routes are lacking there is nothing to be gained by shifting lorries from one unsuitable road to another." That's what the Freight Transport Association says.

It's a good moment to look with the FTA at what has been happening, because we could be in for more group insanity, led by "environmentalists" and popular journalists, writing loaded stories about juggernauts (how small can a vehicle be and still be a juggernaut? A newspaper referred to juggernaut dice recently. Is a Rolls a juggernaut car?).

Papers have been carrying reports of a leak from the Department of Transport that some senior civil servants favour an increase in permitted gvw for the UK and that they have in mind a loaded inquiry coming down in favour. Or is it a rumour started by the rail lobby so that when a fair inquiry proves the case, its findings can be ignored as fixed?

The Minister was reported by a national paper as saying that he is personally against a bigger permitted gvw.

To this background comes the FTA report Freight Facts 2/78, Five Years of Lorry Management Since Dykes. Heading its release to the press "Roads not bans the way to control lorries," the FTA argues that further removal of lorries from environmentally sensitive areas will require road building and improvement rather than bans and routeing measures.

"A detailed survey," it says, "of action taken under the Dykes Act — the Heavy Commercial Vehicles (Control and Regulations) Act 1973 — shows that most authorities have followed closely the Government's advice and achieved a sensible balance between environmental benfit and distribution costs on industry.

"By stark contrast to the call three weeks ago by John Horam, Parliamentary UnderSecretary of State for Transport, for greater action under the Act, the FTA survey shows that local authorities have been keen to route lorries away from central and urban areas. The major constraints have been cost and opportunity and in particular the shortage of road funds at local level."

Further environmental improvement, says the FTA, and it has surely made the case, will therefore require the building of new roads rather than further control measures which are likely to be counter-productive.

It adds that most authorities comment that they either have no further proposals or that further action will be limited to localised restrictions where necessary.

In its report the FTA wel comes the fact that where local authorities have identified desirable lorry route networks they are now using them when planning the allocation of road maintenance and improvement funds.

There is a wide diversity in the approach adopted by local authorities. Although the most common form of control is a 3-ton unladen weight limit, this can be applied on either a zonal or a road basis. Some authorities use width limits (either alone or in combination with a weight limit); while others use one-way schemes or length limits. Only one county, West Glamorgan, still has proposals for a mandatory routeing scheme.

Comments the FTA: "There is now, however, a common acceptance that designated lorry routeing is not the panacea some thought."

The Dykes Act in 1973 required local authorities to survey their areas and prepare written proposals for lorry management, and for the first time allowed the denial of access on amenity grounds. In January 1977 the FTA published a situation report on councils' response to the Act.

The present further review takes account of developments since then: the Government's rejection of national lorry routeing; reaction in Scotland; and further progress by councils in shaping and developing their Dykes Act policies.

Although the FTA report finds that lorry routeing is not the panacea once thought — and that there is common acceptance that this is so — the report says there is major concern by trade and industry over lorry bans in Berkshire and West Yorkshire.

An interesting and important development since the FTA's first report on Dykes has been the entry of Scotland to the area. The deadline for Scottish local authorities to comply with Dykes was January 1, 1978 — one year later than that for England and Wales.

Without exception the approach in Scotland has been low-k6y — no comprehensive region-wide schemes, a few local bans where necessary. Whatever Dykes had to offer in environmental benefits through lorry control measures, there is less scope in Scotland. Reliance on road transport of freight is almost total. Also Scottish local authorities had the advantage of seeing Dykes, progress in England and Wales one year earlier.