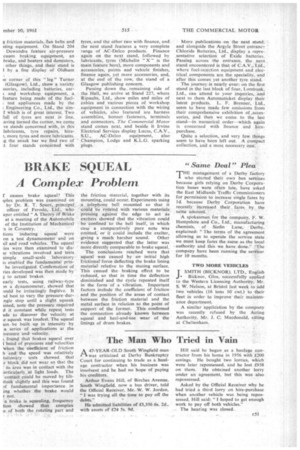 IF causes brake squeal? This iplex problem was examined on by Dr. R. T. Spurr, principal' officer of Ferodo, Ltd., who aper entitled "A Theory of Brake at a meeting of the Automobile of the Institution of Mechanical -s in Coventry.

tions inducing squeal were on a test dynamometer and on til and road vehicles. The squeal ies were then examined to disie vibrations involved and tests simple small-scale laboratory is enabled the fundamental prinbe investigated. Confirmation of ries developed was then made by g to actual brakes.

early tests, using railway-type m a dynamometer, showed that :mild be irritatingly fugitive. It -id best to vary the pressure durngle stop until a slight squeak lined, note the pressure required d it constant while repeat tests ade to discover the velocity at Le squeak was loudest. The squeal ten be built up in intensity by a series of applications at the )ressure and velocity.

.articularly.at light loads. The contact could be moved by tiltileac slightly and this was found 3f fundamental importance in ing whether the brake would r not.

-a brake is squealing, frequency tion showed that complex is of both the rotating part and the friction material, together with its mounting, could occur. Experiments using a telephone .bell mounted so that it could be 'rotated with various materials pressing against the edge to act as exciters showed that the vibration could be confined to the bell itself, in which case a comparatively pure note was emitted, or it could include the exciter,

giving a much harsher sound. Other evidence suggested that the latter was more directly comparable to brake squeal.

The. conclusions • reached were that squeal was caused by an initial high frictional force deflecting the brake lining material relative to the mating surface. This caused the braking effect to be reduced, so that in time the deflection diminished and the cycle repeated itself in the form of a vibration. Important factors include the coefficient of friction and the position of the areas of contact between the friction material and the metal surface in relation to the point of support of the former. This confirmed the connection already known between squeal and heel-and-toe wear of the linings of drum brakes.

THE management of a Derby factory who started their own bus services because girls relying on Derby Corporation buses were often late, have asked the East Midlands Traffic Commissioners for permission to increase single fares by Id. because Derby Corporation have

A spokesman for the 'company, F. W. Hampshire and Co., Ltd., manufacturing Chemists, of Sinfin • Lane, • Derby, explained: " The terms of the agreement allowing us to operate the service state we must keep fares the .same as the local authority and this we have done." The company have been running the serVices for 10 months.

A similar application by the company was recently refused by the Acting Authority, Mr. J. C. Macdonald, sitting at Cheltenham.