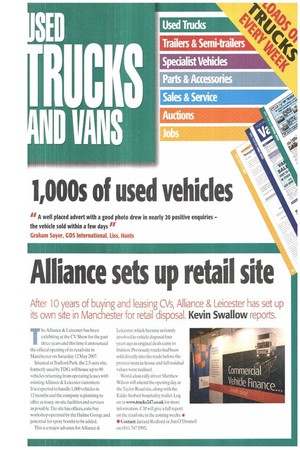 After 10 years of buying and leasing CVs, Alliance & Leicester has set up its own site in Manchester for retail disposal. Kevin Swallow reports.

The Alliance & Leicester has been exhibiting at the CV Show for the past three years and this time it announced the official opening of its retail site in Manchester on Saturday 12 May 2007.

Situated at Trafford Park, the 2.5-acre site, formerly used by TDG, will house up to 90 vehicles returning from operating leases with existing Alliance & Leicester customers, It is expected to handle 1,000 vehicles in 12 months and the company is planning to offer as many on-site facilities and services as possible. The site has offices, a six-bay workshop operated by the Hulme Group, and potential for spray booths to be added.

This is a major advance for Alliance & Leicester, which became seriously involved in vehicle disposal four years ago as original deals came to fruition. Previously trucks had been sold directly into the trade before the process went in-house and full residual values were realised.

World-class rally driver Matthew Wilson will attend the opening day at the Taylor Road site, along with the Eddie Stobart hospitality trailer. Log on to www.trucks247-co.uk for more information. CM will give a full report on the retail site in the coming weeks. • • Contact Jarrard Redford or Jim O'Donnell on 0161 747 5995.