Gwent police are under suspicion about contract 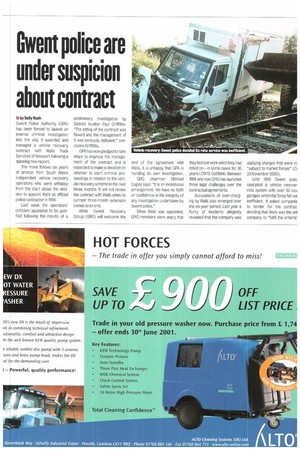 Page 13, 10th May 2001 — Gwent police are under suspicion about contract
Close
Noticed an error?
If you've noticed an error in this article please click here to report it so we can fix it.
Keywords : Counties Of Wales, Counties Of The United Kingdom, Gwent, Monmouthshire, Vehicle Recovery

• by Sally Nash Gwent Police Authority (GPA) has been forced to launch an internal criminal investigation into the way it awarded and managed a vehicle recovery contract with Walls Truck Services of Newport following a damning new report.

The move follows six years of protest from South Wales independent vehicle recovery operators who were unhappy from the start about the decision to appoint Walls as official police contractor in 1994.

Last week the operators' criticism appeared to be justified following the results of a preliminary investigation by District Auditor Paul Griffiths. "The letting of the contract was flawed and the management of it was seriously deficient," concludes Griffiths.

GPA has now pledged to take steps to improve the management of the contract and is expected to make a decision on whether to start criminal proceedings in relation to the vehicle recovery scheme in the next three months. It will not renew the contract with Walls when its current three-month extension comes to an end.

While Gwent Recovery Group (GRG) will welcome the end of the agreement with Walls, it is unhappy that GPA is handling its own investigation.

GRG chairman Michael Eagles says: "It is an incestuous arrangement. We have no faith or confidence in the integrity of any investigation undertaken by Gwent police."

When Walls was appointed. GRG members were angry that they had lost work which they had relied on—in some cases for 30 years (CM13 Oct1994). Between 1994 and now GRG has launched three legal challenges over the contractual agreements.

Accusations of over-charging by Walls also emerged over the six-year period. Last year a flurry of incidents allegedly revealed that the company was applying charges that were nc "subject to market forces" (0 23 November 2000).

Until 1993 Gwent polio operated a vehicle recover rota system with over 50 loc garages which the force felt wa inefficient. It asked companie to tender for the contrac deciding that Walls was the onl company to "fulfil the criteria'