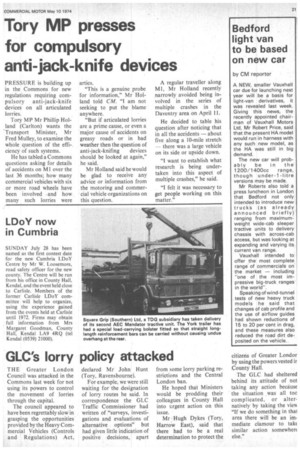 THE Greater London Council was attacked in the Commons last week for not using its powers to control the movement of lorries through the capital.

The council appeared to have been regrettably slow in grasping the opportunities provided by the Heavy Commercial Vehicles (Controls and Regulations) Act, declared Mr John Hunt (Tory, Ravensbourne), For example, we were still waiting for the designation of lorry routes he said. In correspondence the GLC Traffic Commissioner had written of "surveys, investigations and evaluations of alternative options" but had given little indication of positive decisions, apart from some lorry parking restrictions and the Central London ban, He hoped that Ministers would be prodding their colleagues in County Hall into urgent action on this issue.

Mr Hugh Dykes (Tory, Harrow East), said that there had to be a real determination to protect the citizens of Greater Londor by using the powers vested ir County Hall.

The GLC had sheltered behind its attitude of not taking any action because the situation was all too complicated, or alternatively by taking the view "If we do something in thai area there will be an immediate clamour to takc similar action somewhen else."