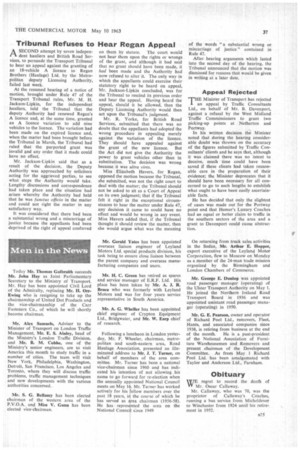 ASECOND attempt by seven independent hauliers and British Road Services, to persuade the Transport Tribunal to hear an appeal against the granting of an 18-vehicle A licence to Regan Brothers (Haulage) Ltd. by the Metropolitan deputy Licensing Authority, failed last week.

At the resumed hearing of a notice of motion, brought under Rule 47 of the Transport Tribunal rules, Mr. M. H. Jackson-Lipkin, for the independent hauliers, told the Tribunal that the deputy Authority had renewed Regan's A licence and, at the same time, granted an A licence variation to add nine vehicles to the licence. The variation had been made on the expired licence and, when the matter had been brought before the Tribunal in March, the Tribunal had ruled that the purported grant was invalid and any order that it Made could have no effect.

Mr. Jackson-Lipkin said that as a result of the decision, the Deputy Authority was approached by solicitors acting for the aggrieved parties, to see what steps the Authority would take. Lengthy discussions and correspondence had taken place and the situation had arisen whereby the Authority had held that he was functus officio in the matter and could not right the matter in any satisfactory way.

It was considered that there had been a substantial wrong and a miscarriage of justice because the appellants had been deprived of the right of appeal conferred on them by statute. The court would not hear them upon the rights or wrongs of the grant, and although it had said that no grant should have been made, it had been made and the Authority had now refused to alter it. The only way in which the appellants could exercise their statutory right to be heard on appeal, Mr. Jackson-Lipkin concluded, was for the Tribunal to rescind its previous order and hear the appeal. Having heard the appeal, should it be allowed, then the Deputy Licensing Authority would then act upon the Tribunal's judgment.

Mr. R. Yorke, for British Road Services, submitted that there was no doubt that the appellants had adopted the wrong procedure in appealing merely against the variation of the licence. They should have appealed against the grant of the new licence. But the Act did not give the Authority the power to grant vehicles other than in substitution. The decision was wrong because it was ultra vires.

Miss Elizabeth Havers, for Regan, opposed the motion because the Tribunal, she submitted, was not the right court to deal with the matter; the Tribunal should not be asked to sit as a Court of Appeal on its own judgment; that if the Tribunal felt it right in the exceptional circumstances to hear the matter under Rule 47, any decision it came to could have no effect and would be wrong in any event. Miss Havers added that, if the Tribunal thought it should review the matter, then she would argue what was the meaning of the words "a substantial wrong or miscarriage of justice" contained in Rule 47.

After hearing arguments which lasted into the second day of the hearing, the Tribunal announced that the motion was dismissed for reasons that would be given in writing at a later date.

THE Minister of Transport has rejected an appeal by Traffic Consultants Ltd., on behalf of Mr. B. Davenport, against a refusal by the West Midland Traffic Commissioners to grant two picking-up points at Netherton and Portway.

In his written decision the Minister noted that during the hearing considerable doubt was thrown on the accuracy of the figures submitted by Traffic Consultants' clients and he says that, although it was claimed there was no intent to deceive, much time could have been saved if these clients had taken reasonable care in the preparation of their evidence; the Minister deprecates that it should have been necessary for all concerned to go to such lengths to establish what ought to have been easily ascertainable facts.

He has decided that only the slightest of cases was made out for the Portway point and that Homer's Luxury Coaches had an equal or better claim to traffic in the southern sectors of the area and a grant to Davenport could cause abstraction.