BUS PROGRESS ALONG THE COLNE VALLEY. 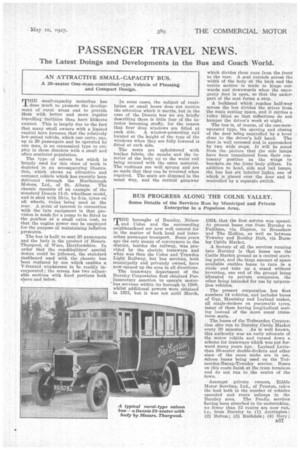 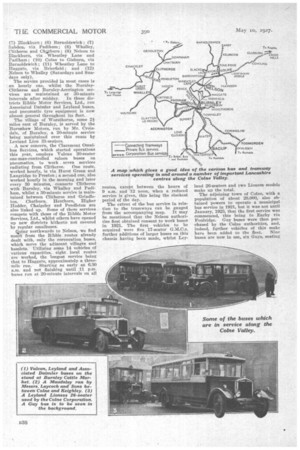 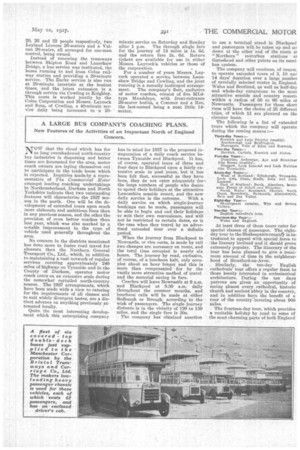 Page 63, 10th May 1927 — BUS PROGRESS ALONG THE COLNE VALLEY.
Close
Noticed an error?
If you've noticed an error in this article please click here to report it so we can fix it.
Keywords : Market Towns In England, Clitheroe, Ribble Motor Services, Colne, Burnley & Pendle, Burnley, Barnoldswick, Padiham

Some Details of the Services Run by Municipal and Private Enterprise in a Populous Area.

THE boroughs of Burnley, Nelson and Colne and the surrounding neighbourhood are now well catered for in the matter of both local and interurban passenger transport. Some years ago the only means of conveyance in the district, besides the railway, was protided by the electric tramways and what was then the Colne and 9.‘rawden Light Railway, but bus services, both municipally and privately owned, have now opened up the area in all directions.

The tramways department of the Burnley Corporation first obtained Parliamentary sanction to operate motor' bug services within its borough in 190g. whilst additional powers were obtained in 1921, but it was not until March,

1924, that the first service was opened. At present buses run from Burnley to Padiham, via 'Lipton, to Brunshaw and The Hollins, as well as between Townley and Reitlley Halt, via Burnley Cattle Market.

A feature of all the services running into Burnley is that buses use the Cattle Market ground as a central starting point, and the large amount of space available enables buses to turn in a circle and take up a stand without reversing, one end of the ground being allocated to private companies, the other being intended for use by cprporadon vehicles.

The present corporation bus fleet numbers 14 vehicles, and includes buses of Guy, Maudslay and Leyland makes, all single-deckers on pneumatic tyres, many of them having longitudinal seating instead of the more usual transverse seats.

The buses of the Todmorden Corporation also run to l3urnley Cattle Market every 30 minutes. As is well known, this authority was an early advocate of the motor vehicle and turned down a scheme for tramways which was put forward many years ago. Leyland Leviathan 50-seater double-deckers and other sizes of the same make are in use, saloon buses being used on the Todmorden-Bacup-Townley service. Buses on this route finish at the tram terminus and do not run to the centre of the town.

Amongst private owners, Ribble Motor Services, Ltd., of Preston, ts.kes the lead both in the number of vehicles operated and route mileage in the 13urnley area. The Pendle services having been absorbed in its undertaking, no fewer than 12 routes are newrun, i.e., from Burnley to (1) Accrington; (2) Bolton; (3) Rochdale; (4) Bury ; (5) Blackburn ; (6) Barnoldswick ; (7) Sabden, via Padiham; (8) Whalley, _71itheroe and Chfg-burn; (9) Nelson to Blackburn, via . Wheatley Lane and Padiham ; (10) Coins to Gisburn, via Barnoldswick ; (11) Wheatley Lane to Hagg,ate, via Brierfield ; and (12) Nelson to Whalley (Saturdays and Sundays only).

The service provided in most cages is an hourly one, whilst the BurnleyClitheroe and Burnley-Accrington services are maintained at 30-minute intervals after midday. In these districts Ribble Motor Services, Ltd., run Associated Daimler and Leyland buses, and pneumatic tyre equipment is now almost general throughout its fleet.

The village of Worsthorne, some 21 miles east of Burnley, is served by the Burnshaw Motors, run by Mr. Oralsdale, of Burnley, a 20-minute service being maintained over this route by Leyland Lion 31-seaters.

A new concern, the Claremont Omnibus Services, which started operations this year, employs 'Vulcan 20-seater one-man-controlled saloon buses on pneumatics, to work . seven services radiating from Clitheroe. One route, worked hourly, is via Hurst Green and Langridge to Preston; a second one, also worked hourly in the morning and later every 30 minutes, connects Clitheroe with Burnley, via Whalley and Padiham, whilst a 30-minute service is maintained between Clitheroe and Grindleton. Chatburn, Henthorn, Higher Hodder, Chaigeley and Pendleton are also linked up. Some of these services compete with those of the Ribble Motor Services, Ltd., whilst others have opened up new districts hitherto not covered by regular omnibuses, qoinz northwards to Nelson, we find apart from the Ribble routes already dealt with, only the corporation buses, which serve the adjacent villages and. hamlets. Utilizing some 14 vehicles of various capacities, eight local routes are worked, the longest service being that to lIaggate, approximately a three mile run. Starting as early as 6.20 a.m. and not finishing until 11 p.m. bilges run at 20-minute intervals on all

routes, except between the hours of 9 a.m. and 32 noon, when a reduced service is given, this being the slackest period of the day.

The extent of the bus service in relation to the tramways can be gauged from the accompanying map. It may be mentioned that the Nelson authorities first obtained consent to work buses in 1921. The first vehicles to be acquired were five 17-seater G.M.C.s, further additions of larger buses on this chassis having been made, whilst Ley

land 26-seaters and two Lioness models make up the total.

The adjoining town of Coins, with a population of about 28,000, also obtained powers to operate a municipal bus service in 1921, but it was not until January, 1923, that the first service was commenced, this being to Earby via Foulridge. Guy buses were then purchased by the Caine authorities, and, indeed, further vehicles of this make

have been added to the fleet. Nine buses are now in use, six Guys, seating 20, 26 and 32 people respectively, two Leyland Lioness 26-seaters and a Vulcan 20-seater, all arranged for one-man control, being owned.

Instead of renewing the tramways between Skipton Road and Laneshaw Bridge, a bus service was instituted, the buses running to and from Colne railway station and providing a 20-minute service. The Earby service is also run at 20-minute intervals at the busiest times, and the latest extension is a through service via Cowling to Keighley. This route is worked jointly by the Come Corporation and Messrs. Laycock and Sons, of Cowling, a 40-minute service daily being increased to a 20 minute service on Saturday and Sunday after 1 p.m. The through single fare for the journey of 13 miles is is. 6d. and the return fare 2s.. 6d. Return tickets are available for use in either Messrs. Layeock's vehicles or those of the corporation.

For a number of years Messrs. Laycock operated a service between Laneshaw Bridge and Cowling, and the joint running is a recently instituted arrangement. The company's fleet, exclusive of motor coaches, ccinsist of five MLas type Maudslays, with front-entrance 26-seater bodies, a Commer and a Bee, the last-named being a neat little 14seater.