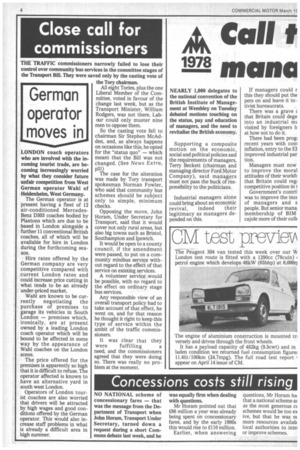 Page 6, 10th March 1978 — Concessions costs still rising
Close
Noticed an error?
If you've noticed an error in this article please click here to report it so we can fix it.
Keywords : John Horam, Horam, British Rail

NO NATIONAL scheme of concessionary fares — that was the message from the Department of Transport when John Horam, Transport Under Secretary, turned down a request during a short Commons debate last week, and he was equally firm when dealing with questions.

Mr Horam pointed out that £86 million a year was already being spent on concessionary fares, and by the early 1980s this would rise to £110 million.

Earlier, when answering questions, MT Horam ha, that a national scheme as as the most generous et schemes would be too ex ive, but that he was m more resources availab local authorities to intn or improve schemes.