But surely the whole idea 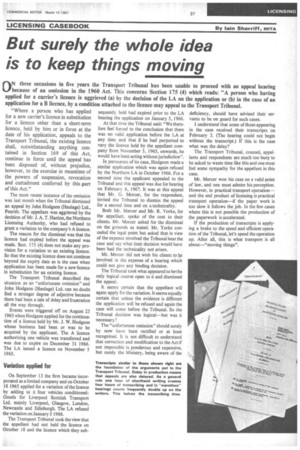 Page 39, 10th March 1967 — But surely the whole idea
Close
Noticed an error?
If you've noticed an error in this article please click here to report it so we can fix it.
Keywords : Appeal, Appellate Review, Lawsuits, Legal Procedure, Australian Courts, Law / Crime

is to keep things moving ONthree occasions in five years the Transport Tribunal has been unable to proceed with an appeal hearing because of an omission in the 1960 Act. This concerns Section 175 (4) which reads: "A person who having applied for a carrier's licence is aggrieved (a) by the decision of the LA on the application or (b) in the case of an application for a B licence, by a condition attached to the licence may appeal to the Transport Tribunal.

"Where a person who has applied for a new carrier's licence in substitution for a licence other than a short-term licence, held by him or in force at the date of his application, appeals to the Transport Tribunal, the existing licence shall, notwithstanding anything contained in Section 169 of this Act, continue in force until the appeal has been disposed of, without prejudice, however, to the exercise in meantime of the powers of suspension, revocation and curtailment conferred by this _part of this Act."

The most recent instance of the omission was last month when the Tribunal dismissed an appeal by John Hodgson (Haulage) Ltd., Penrith. The appellant was aggrieved by the decision of Mr. J. A. T. Hanlon, the Northern Licensing Authority, who had refused to grant a variation to the company's A licence.

The Transport Tribunal described the situation as an "unfortunate omission" and John Hodgson (Haulage) Ltd. can no doubt find a stronger degree of adjective because there had been a tale of delay and frustration all the way through.

Events were triggered off on August 23 1965 when Hodgson applied for the continuation of a licence held by Mr. J. W. Hodgson whose business had been or was to be acquired by the applicant. The A licence authorizing one vehicle was transferred and was due to expire on December 31 1966. The LA issued a licence on November 5 1965.

On September 13 the firm became incorporated as a limited company and on October 18 1965 applied for a variation of the licence by adding to it four vehicles conditioned: Goods for Liverpool Scottish Transport Ltd. mainly Liverpool, Glasgow, London, Newcastle and Edinburgh. The LA refused the variation on January 5 1966.

sequently held had expired prior to the LA hearing the application on January 5, 1966.

At that time the Tribunal said: "We therefore feel forced to the conclusion that there was no valid application before the LA at any time and that if he had purported to vary the licence held by the appellant company from November 5, 1965, onwards, he would have been acting without jurisdiction".

In pursuance of its case, Hodgson made a similar application which was again refused by the Northern LA in October 1966. For a second time the applicant appealed to the Tribunal and this appeal was due for hearing on February 6, 1967. It was at this appeal that Mr. G. Mercer, for the respondent, invited the Tribunal to dismiss the appeal for a second time and on a technicality.

Both Mr. Mercer and Mr. R. Yorke, for the appellant. spoke of the cost to their clients. Mr. Mercer asked for the dismissal on the grounds as stated. Mr. Yorke conceded the legal point but asked that in view of the expense involved the Tribunal hear the case and say what their decision would have been had the technicality not arisen.

Mr. Mercer did not wish his clients to be involved in the expense of a hearing which could not give any binding decision.

The Tribunal took what appeared to bethe only logical course open to it and dismissed the appeal.

It seems certain that the appellant will again apply for the variation. It seems equally certain that unless the evidence is different the application will be refused and again the case will come before the Tribunal. So the Tribunal decision was logical—but was it necessary?

The "unfortunate omission" should surely by now have been rectified or at least recognized. It is not difficult to understand that correction and modification to the Act if not impossible is ponderous and expensive, but surely the Ministry, being aware of the

deficiency, should have advised their servants to be on guard for such cases.

I understand that some of those appearing in the case received their transcripts on February 3. (The hearing could not begin without the transcript.) If this is the case what was the delay?

The Transport Tribunal, counsel, appellants and respondents are much too busy to be asked to waste time like this and one must feel some sympathy for the appellant in this case.

If the production of transcripts is applying a brake to the speed and efficient operation of the Tribunal, let's speed the operation up. After all, this is what transport is all about—"moving things".