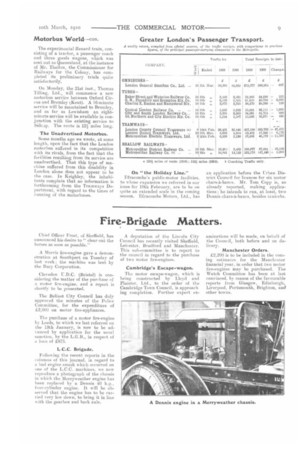 Page 9, 10th March 1910 — Fire-Brigade Matters.
Close
Noticed an error?
If you've noticed an error in this article please click here to report it so we can fix it.
Keywords : Dearborn, Michigan, Ford Motor Company

Chief Officer Frost, of Sheffield, has announced his desire to" clear out the horses as soon as possible."

A Morris fire-engine gave a demonstration at Southport on Tuesday of last week: the machine was lent by the Bury Corporation.

Clevedon U.D.C. (Bristol) is considering the matter of the purchase of a motor fire-engine, and a report is shortly to be presented.

The Belfast City Council has duly approved the minutes of the Police Committee, for the expenditure of £2,000 on motor fire-appliances.

The purchase of a motor fire-engine by Leeds, to which we last referred on the 13th January, is now to be advanced by application for the usual sanction, by the L.G.B., in respect of ii loan of £875.

L.C.C. Brigade, Following the recent reports in the columns of this journal, in regard to a had engine smash which occurred on one of the L.C.C. machines, we now reproduce a photograph of the chassis in which the Merryweather engine has been replaced by a Dennis 40 h.p., four-cylinder engine. It will be observed that the engine has to be carried very low down, to bring it in line with the gearbox and back axle. A deputation of the Lincoln City Council has recently visited Sheffield, Leicester, Bradford and Manchester. This sub-committee is to report to the council in regard to the purchase of two motor fire-engines.

The motor escape-wagon, which is being constructed by Lloyd and Meister, Ltd., to the order of the Cambridge Town Council, is approaching completion. Further expert ex

aminations will be made, on behalf of the Council, both before and on delivery.

£2,200 is to be included in the coming estimates for the Manchester financial year, in order that two motor fire-engines may be purchased. The Watch Committee has been at last convinced. by reason of the favourable reports from Glasgow, Edinburgh, Liverpool, Portsmouth, Brighton, and other towns.