What a van fleet manager needs 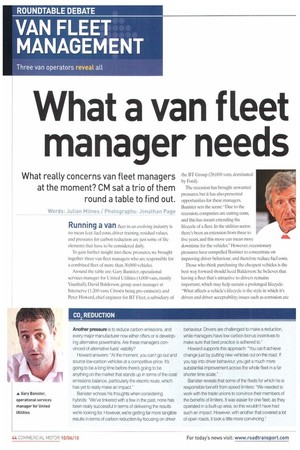 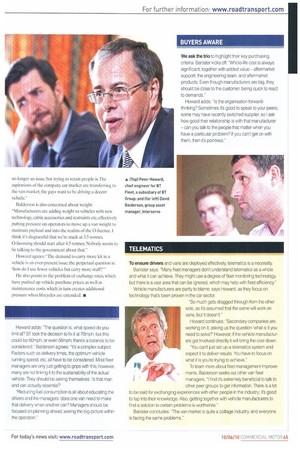 Page 44, 10th June 2010 — What a van fleet manager needs
Close
Noticed an error?
If you've noticed an error in this article please click here to report it so we can fix it.
Keywords : Car Classifications, Van, Fleet, Business / Finance

What really concerns van fleet managers at the moment? CM sat a trio of them round a table to find out.

Words: Julian Milne's Photographs: Jonathan Page Running a van fleet in an evolving industry is no mean tc,it: fuel costs, driver training, residual values. and pressures for carbon reduction arc just some of the elements that have to be considered daily.

To gain further insight into these pressures, we brought together three van fleet managers who are responsible for a combined fleet of more than 30,000 vehicles.

The recession has brought unwanted pressures, but it has also presented opportunities for these managers. Banister sets the scene: "Due to the recession, companies are cutting costs. and this has meant extending the lifecyde of a fleet. In the utilities sector, there's been an extension from three to five years, and this move can mean more downtime for the vehicles." However, recessionary pressures have compelled Banister to concentrate on improving driver behaviour, and therefore reduce fuel costs.

Those who think purchasing the cheapest vehicles is the best way forward should heed Balderson: he believes that having a fleet that's attractive to drivers remains important, which may help sustain a prolonged lifecycle. "What affects a vehicle's lifecycle is the style in which it's driven and driver acceptability; issues such as corrosion are no longer an issue. but trying to retain people is.The aspirations of the company car market are transferring to the van market; the guys want to be driving a decent vehicle."

Balderson is also concerned about weight: "Manufacturers are adding weight to vehicles with new technology, cabin accessories and restraints etc, effect i el% putting pressure on operators to move up a van weight to maintain payload and into the realms of the 0-licence. I think it's disgraceful that we're stuck at 3.5-tonnes. 0-licensing should start after 4.5-tonnes. Nobody seems to be talking to the government about that."

Howard agrees: "The demand to carry more kit in a vehicle is an ever-present issue: the perpetual question is: 'how do I use fewer vehicles but carry more stuff?"

He also points to the problem of exchange rates, which have pushed up vehicle purchase prices, as well as maintenance costs, which in turn creates additional pressure when lifecveles are extended. •