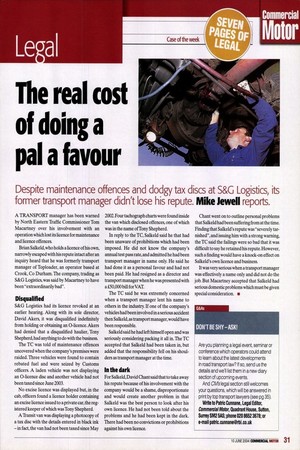 Page 25, 10th June 2004 — The real cost
Close
Noticed an error?
If you've noticed an error in this article please click here to report it so we can fix it.

Despite maintenance offences and dodgy tax discs at S&G Logistics, its

A TRANSPORT manager has been warned by North Eastern Traffic Commissioner Tom Macartney over his involvement with an operation which lost its licence for maintenance and licence offences.

Brian Salkeld, who holds a licence of his own, narrowly escaped with his repute intact after an inquiry heard that he was formerly transport manager of Toploader, an operator based at Crook, Co Durham. The company, trading as S&G Logistics, was said by Macartney to have been "extraordinarily bad". Disqualified Disqualified

S&G Logistics had its licence revoked at an earlier hearing. Along with its sole director, David Akers, it was disqualified indefinitely from holding or obtaining an 0-licence. Akers had denied that a disqualified haulier, Tony Shepherd, had anything to do with the business.

The TC was told of maintenance offences uncovered when the company's premises were raided. Three vehicles were found to contain rebated fuel and were seized by Customs officers. A laden vehicle was not displaying an 0-licence disc and another vehicle had not been taxed since June 2003.

No excise licence was displayed but, in the cab, officers found a licence holder containing an excise licence issued to a private car, the registered keeper of which was Tony Shepherd. A Transit van was displaying a photocopy of a tax disc with the details entered in black ink — in fact, the van had not been taxed since May

2002. Four tachograph charts were found inside the van which disclosed offences, one of which was in the name of Tony Shepherd. In reply to the TC, Salkeld said he that had been unaware of prohibitions which had been imposed. He did not know the company's annual test pass rate, and admitted he had been transport manager in name only. He said he had done it as a personal favour and had not been paid. He had resigned as a director and transport manager when he was presented with a £50,000 bill for VAT

The TC said he was extremely concerned when a transport manager lent his name to others in the industry. If one of the company's vehicles had been involved in a serious accident then Salkeld, as transport manager, would have been responsible.

Salkeld said he had left himself open and was seriously considering packing it all in. The TC accepted that Salkeld had been taken in, but added that the responsibility fell on his shoulders as transport manager at the time. In the dark

For Salkeld, David Chant said that to take away his repute because of his involvement with the company would be a shame, disproportionate and would create another problem in that Salkeld was the best person to look after his own licence. He had not been told about the problems and he had been kept in the dark. There had been no convictions or prohibitions against his own licence.

Chant went on to outline personal problems that Salkeld had been suffering from at the time. Finding that Salkeld's repute was "severely tarnished", and issuing him with a strong warning, the TC said the failings were so bad that it was difficult to say he retained his repute. However, such a finding would have a knock-on effect on Salkeld's own licence and business. It was very serious when a transport manager was effectively a name only and did not do the job. But Macartney accepted that Salkeld had serious domestic problems which must be given special consideration. •