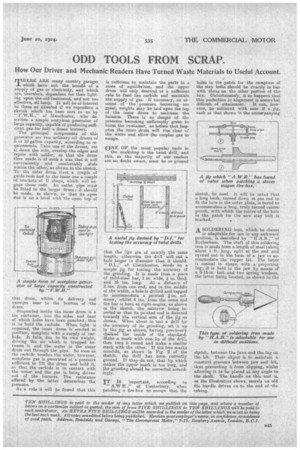 Page 31, 10th June 1924 — ODD TOOLS FROM SCRAP.
Close
Noticed an error?
If you've noticed an error in this article please click here to report it so we can fix it.

How Our Driver and Mechanic Readers Have Turned Waste Materials to Useful Account.

MHERE ARE many country garages which have not the benefit of a supply of gas or electricity, and -which are, therefore, dependent for their lighting upon the old-fashioned, and not too effective, oil lamp. It will be of interest to those so situated if we reproduce a sketch which has been sent to us by " F.W.H.," of Manchester, who describes a simple acetylene generator of large capacity, capable of producing sufficient gas for half a dozen burners.

The principal components of this generator are two ordinary oil drums of 5 or 10-gallon capacity, according to requirements. Take one of the drum; cut it down the side overlap the edges and rejoin with solder, so that the drum thus made is of such a size that it will con veidently and comfortably slide within the other, as shown in the sketch. To the outer drum rivet a couple of guide rods and to the inner one a couple of brackets of U shape, which will engage those rods. An outlet pipe must be fitted to the larger drum ; it should be made, as shown, so that its open find is on a level with the open top of that drum, whilst its delivery end emerges near 'to the bottom of the drum.

Suspended inside the inner drum is a tin container, into the sides and base of which holes have been punched ; this is to hold the carbide. When light is required, the inner drum is erected in position, complete with a supply of carbide. It falls, due to its own weight, driving the air which is trapped between it and the water in the outer drum out through the pipe. So soon as the carbide touches the water, however, acetylene gas is generated at a pressure sufficient to lift the drum and hold it, so that the carbide is in contact with the water and the gas is being driven out of the burners. The resistance offered by the latter determines the pressure.

As a rule it will be found that this is sufficient to maintain the parts in a state of equilibrium, and the upper drum will only descend at a sufficient rate to feed the carbide and maintain the supply of gas. If necessary, on account of the pressure becoming too great, weights may be laid upon the top of the inner drum to maintain the balance. There is no danger of the pressure becoming .sufficiently great to burst the container, as before that happens the inner drum will rise clear of the water and allow the surplus gas to escape. .

ONE OF the most popular tools in the workshop is the twist drill, and this, as the majority of our readers are no doubt aware, must be se ground

that the lips are of exactly the same length, otherwise the drill will cut a hole larger in diameter than it should. " DJ.," of Cleckheaton' sends us a simple jig for testing the accuracy of the grinding. It is made from a piece oi mild-steel bar, 1 in. wide, in. thick

and 16 ins. long. At a distance of 2 ins. from one end, and in the middle of the width, a hole is drilled and tapped to accommodate a pointed a-in. setscrew, whilst 4 ins, from the same end the bar is bent at right-angles, as shown in the sketch, the setscrew being inserted so that its pointed end is directed toward, the vertical arm of the jig as shown. When about to test a drill for the accuracy of its grinding, set it up in the jig as shown, having previously chalked the inside of the standard. Make a mark with one lip of the drill, then turn it round and make a similar mark with the other. If the two marks coincide, as shown in Fig. 2 of the sketch, the drill has been correctly ground. If they do not, that lip which makes the upper Mark is too long, and the grinding should be corrected accordingly.

IT IS important, according to A.W.R.," of Canterbury, when patching a fire-box to ensure that the holes in the patch for the reception of the stay bolts should be 4xactly in line with those on the other portion of the box. Unfortunately, it so happens that this perfection in alignment is somewhat

diffieult of attainment. It can, however, be achieved with ease if a such as that shown in the acoonipanying

sketch, be used. It will be noted that a long bush, turned down at one end to fit the hole in the outer plate, is bored to accommodate a long truly turned centre punch, with which the centre of the hole in the patch for the new stay bolt is marked.

A SOLDERING iron, which he claims

is adaptable for use in any awkward position, is described by " H.A.B.," of Rotherham. The shaft of this soldering iron is made from a length of steel tubing about 1 ft. long, split at the end and orened out in the form of a jaw to accommodate the copper bit. The latter is conical in shape, with a projecting lug; it is held in the jaw by means of a 5-16-in, bolt and two spring washers, the latter being located, as shown in the alosteh, between the jaws and the lug on the bit. Their object is to maintain a constant pressure between jaw and bit, thus preventing it from slipping, whilst allowing it to be placed at any angle to the shaft. The handle on this tool is, as the illustration shows, merely an old file handle driven on to the end of the tubing.