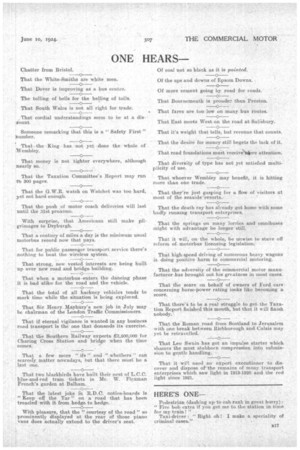 Page 3, 10th June 1924 — ONE HEARS
Close
Noticed an error?
If you've noticed an error in this article please click here to report it so we can fix it.
Keywords : London Borough Of Brent, Wembley

That the White-Smiths are white men.

That Dover is improving as a bus centre.

The tolling of bells for the belling of tolls.

That South Wales is not all right for trade.

, That cordial understandings seem to be at distount.

Someone remarking that this is a " Safety First " • itimber.

That the King has not yet done the whole of Wembley.

That money is not tighter everywhere, although nearly so.

That the Taxation Committee's Report may run tit) 300 pages.

That the G.W.R. watch on Watchet was too hard, yet not hard enough, That the push of motor coach deliveries will last until the 31st proximo.

With surprise, that Americans still make pilgrimages to Dryburgh.

That a century of miles a day is the Minimum usual motorbus record now that pays.

That for public passenger transport service there's nothing to beat the wireless system.

That strong, new vested interests are being built up over new road and bridge building.

That when a motorbus-enters the dancing phase it is bad alike for the road and the vehicle.

That the total of all hackney vehicles tends to mark time while the situation is being explored.

That Sir Henry Maybury's new job in Tilly may be chairman of the London Traffic Commissioners.

That if eternal vigilance is wanted in any business road tiansport is the one that demands its exercise.

That the Southern Railway expects 23,500,000 for Charing Cross Station and bridge when the time comes.

That a few more " ifs " and " whethers " can scarcely matter nowadays, hut that there must be a last one.

That two blackbirds have built their nest of L.C.O. blue-and-red tram tickets in Mr. W. Flexman French's garden at Balham.

That the latest joke in R.D.C. notice-boards is " Keep off the Tar" on a road that has been treaded with it from hedge to hedge.

With pleasure, that the " courtesy of the road" so prominently displayed at the rear of those piano vans does actually extend to the driver's seat. Of coal not so black as it is painted.

Of the ups and downs of Epsom Downs.

Of more cement going by road for roads.

That Bournemouth is prouder than Preston.

That fares are too low on many bus routes.

That East meets West on the road at Salisbury.

That it's weight that tells, but revenue that counts.

That the desire for money still begets the lack of it. That road foundations must receiveNetore attention.

That diversity of type has not yet satisfied multiplicity of use.

That whoever Wembley may benefit, it is hitting more than one trade.

That they're just gasping for a flow of visitors at most of the seaside'resorts. .

That the death ray has already got home with some badly running transport enterprises.

That the springs on many lorries and omnibuses might with advantage be longer still.

That it will, onthe whole, be unwise to stave off reform ofmotorbus licensing legislation.' • That high-speed driving of numerous heavy wagons is doing positive harm to commercial motoring.

That the adversity Of the commercial motor manufacturer has brought out his greatriess in most eases.

That the scare on behalf of owners of Ford cars concerning horse-power rating looks like becoming a score.

That there's to be a real struggle to get the Taxation Report finished this month, but that it will finish nobody.'

That the Roman road from Scotland to Jerusalem with one break between Riehborough and Calais may yet be retravelled.

That Leo Swain has got an impulse starter which shames the most stubborn compression into submission to gentle handling.

That it will need an expert executioner to discover and dispose of the remains of many transport enterprises which saw light in 1919-1920 and the red light since 1921.