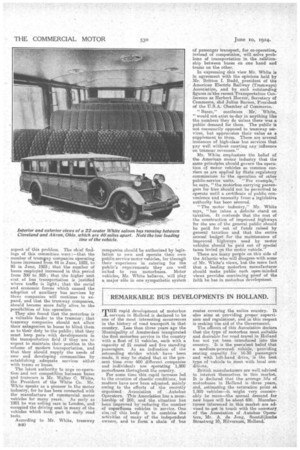 Page 26, 10th June 1924 — REMARKABLE BUS DEVELOPMENTS IN HOLLAND.
Close
Noticed an error?
If you've noticed an error in this article please click here to report it so we can fix it.
Keywords : Bus, Transit Bus, Right- And Left-hand Traffic

IPTIHE rapid development of motorbus _1 services in Holland is declared to be one of the mast -interesting occurrences in the history of road transport in that country. Less than three years ago the Municipality of Amsterdam inaugerated the 'first motorbus service in the country With a fleet of 11 vehicles, each with a ea,paeity of 21 seated and five standing passengers. As an indication' of the astounding strides which' have been made, it may he stated that at the present time over 600 different companies and individuals are operating 1,800 motorbuses throughout the country.

For some time this rapid increase

to the creation of chaotic conditions, but matters 'PAVE) now been adjusted, mainly owing to the efforts of the recently organized Association of Autobus Operators. This Association has a membership a 268, and the situation has been improved by' reducing the number of superfluous vehicles in service. One aim tof this "body is to combine the activities of many of the independent owners, and to form a chain of bus routes covering the entire country. Iii also aims at providing proper supervision and regulations, and in this respect is seeking the aid of the Governinent.

The officers of this Association declare that the type of motorbus most suitable and desirable for road travel in Holland has not yet been introduced into the country. It is the prevalent belief that a medium-powered-_vehicle, 'providing seating -capacity for 16-30 passengers and with left-hand drive,' is the best .type of 'vehicle to Meet with local coin.

British manufacturers are well advised to intereat themselves in this market. It is declared that the average life of motorbuses in Holland is, three years, and, estimating the saturation point at 1,800 vehicles—it might very conceiv• ably be more—the annual demand for new buses will be about 600. Manufacturers interested in this market are advised to get in touch with the secretary of the Association of Autobus Operators, Mr. A. de Jong, Soestelijksch6 Straatweg 10, Hilversum, Holland.