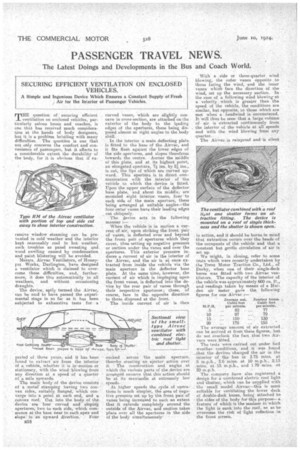 Page 24, 10th June 1924 — PASSENGER TRAVEL NEWS.
Close
Noticed an error?
If you've noticed an error in this article please click here to report it so we can fix it.
Keywords : Aperture, Computer Memory, Hospitality / Recreation

The Latest Doings and Developments in the Bus and Coach World,

A Simple and Ingenious Device Which Ensures a Constant Supply of Fresh , Air for the Interior of Passenger Vehicles.

THE question of securing efficient ventilation on enclosed vehicles, particularly saloon buses and coaches, is one that has received much consideration at the hands of body designers, but it is a problem bristling with many difficulties. The question is one that not only concerns the comfort and convenience of passengers, but it affects to a considerable extent the durability of the body, for it is obvious that if ex

cessive window steaming can be prevented in cold weather and the interior kept reasonably cool in hot weather, such troubles as panel sweating and wood swelling caused by condensation and paint blistering will be avoided.

Messrs. Airvac Ventilators, of Honey. got Works, Darlington, have designed a ventilator which is claimed to overcome these difficulties, and, furthermore, it does this automatically in all weathers, ' and without occasioning draughts.

The device, aptly termed the Airvac, can be said to have passed the experimental stage in so far as it has been subjected to exhaustive tests for a

period of three years, and it has been found to extract air from the interior of a vehicle, whether it is inemotion or stationary, with the wind blowing from any direction at a speed of a quarter of a mile upwards.

The main body of the device consists of a metal stamping having two convex sides, suitably flanged, which converge into a point at, each end, and a convex roof. Cut into the body of the device are four curved and sloping apertures, two to each side, which commence at the base near to each apex and elopein an Upward direction. Four

curved vanes, which are slightly con-cave in cross-section, are attached on the exterior of the body to the leading edges of the apertures, these being disposed almost at right angles to the body shell.

In the interior a main deflecting plate is fitted to the base of the Airvac, and it fits flush against the lower edges of the side apertures, and slopes therefrom towards the centre. Across the middle of this ,plate, and at its highest point, an elongated aperture, 7i ins. by 2L ins., is cut, the lips of which are curved upward. This aperture is in direct communication with the interior of the vehicle to which the device is fitted. Upon the upper surface of the deflector base plate, and about its middle, • are mounted eight interior vanes, four to each side of the main aperture, these being arranged at suitable angles—the four outer vanes have their leading edges cut obliquely. The device acts in the following manner When the vehicle is in motion a current of air, upon striking the front pair of vanes, is deflected over and beyond the front pair of apertures which they cover, time setting up negative pressure or suction under the vanes and over the apertures. This exterior pressure induces a current of air in the interior of the Airvac, and the air is at once extracted from inside the vehicle via the main aperture in the deflector base plate. At the same time, however, the current of air which is impinging upon the front vanes, is deflected into the de'vice by the rear pair of vanes through their respective apertures ; these, of course, face in the opposite direction to those disposed at the front. The inside current of air is then

sucked across the main aperture, thereby creating an ejector action over it. The construction and angles at which the various parts of the device are arranged ensures that this action should be at its maxim-din at extremely low e speeds.

At higher speeds the cycle of operations is much simpler, the area of negative pressure set up by the front pair of vanes being increased to such an extent that it extends completely around the outside of the Airvac, and suction takes place over all the apertures in the side of the body simultaneously' •

With a side or three-quarter wind blowing, the outer vanes opposite to those facing the wind, and the inner vanes whichface the direction of the wind, set up the necessary suction. In' thecase of a following wind blowing-at a velocity which is greater than the speed of the vehicle, the conditions are similar, but opposite, to those which are met when a headwind is encountered. It 'will thus be seen that a large volume of air is extracted continuously from the interior of the vehicle at all speeds and with the wind blowing from any quarter. _ The Airvac is rainproof and-is silent

in action, and it sliould be borne in mind that extraction occurs over the heads of the occupants of the vehicle and that a constant but gentle circulation of air is set up.

We might, in closing, refer to some tests which were recently undertaken bythe Trent Motor Traction Co., Ltd., of Derby, when one of their single-deck buses was fitted with two Airvac ventilators, The capacity of the interior of the vehicle was approximately 600 cu. ft., and readings taken by means of a Heiden air meter, gave the following figures for one Airvac

The company have also registered a design for a -combined electric roof light and shutter, which can be supplied with the small model Airvac—this is most suitable for ventilating the lower deck of double-deck buses, being attached to the sides of the body for this purpose—a feature of which is the manner in which the light is sunk into the roof, so as to overcome the risk of light reflection in the front screen.