AN IMPROVED FORM OF TRACTOR-LORRY. 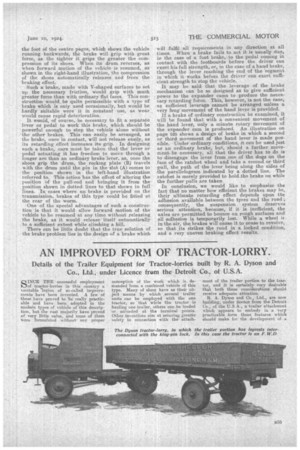 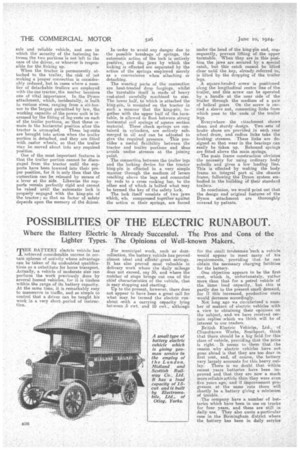 Page 21, 10th June 1924 — AN IMPROVED FORM OF TRACTOR-LORRY.
Close
Noticed an error?
If you've noticed an error in this article please click here to report it so we can fix it.

Details of the Trailer Equipment for Tractor-lorries built by R. A. Dyson and Co., Ltd., under Licence from theY Detroit Co., of U.S.A.

SINCE THE successful employment of tractor-lorries in this country a veritable "legion of Bo-called improvements have been invented. A few of these have proved to be really practicable and have been adopted in the modern types of vehicle of this description, but the vast majority have proved of very little value, and some of them were formulated without any proper

conception of the work width is, demanded from a combined vehicle of this type. Many of thorn have as their object means by which several trailer units can be employed with the one tractor, so • that while the tractor is hauling one trailer, others can be loaded or unloaded at the terminal points. Other imentiems aim at seturing greater safety in connection with the attach

meat of the trailer portion to the treetor and it is certainly very desirable that both these considerations should receive adequate attention.

R. A. Dyson and Co., Ltd., are now building, under licence from the Detroit Co. of the U.S.A., a trailer attachment whi!ch appears to embody in a very practicable form those features which should make for the development of a safe and reliable . vehicle, and one in which the Security of the fastening between the two portions is not left to the care Of the driver, or whoever iS responsible for the' linking up. When the tractor is permanently attached to the trailer, the risk of not making a -proper connection is considerably reduced, but in, cases where a number ef detachable, trailers are employed with the One tractor, the matter becomes one of Nita] importance. In. the Dyson attachment, which, incidentally, is 'built in various sizes, ranging from a six-tootier to the largest permitted by law, the working capacity of the, power unit is increased by the fitting of lee.-rests on each of the trailer portions, so that these remain in the horizontal position after the

tractor is uncoupled. These leg-rests are brought into action when the trailer i portion s detached, and they are fitted with, castor wheels, so that the trailer may be moved about into any required position.

• 'One of the most important features is that the trailer portion cannot be disengaged from the tractor until the supports have been lowered into their proper position, for it is only then that the cotinection can be released by means of a lever at the side. Likewise the supports remain perfectly rigid and cannot he raised until theautomatic lock is properly engaged with the king-pin of the tractor; so that no factor of safety depends upon the memory of the driver.

In -order to avoid any danger due to the possible breakage of springs, the automatic action of the lock is entirely positive, and the jaws by which the locking is effected are separated by the action of thesprings employed merely as a convenience when attaching or detaching.

The wearing parts of the connection are heat-treated drop forgings, whilst the turntable itself is made of heavy cast-steel carefully machined to size. The lower half, to which is attached the king-pin, is mounted on the tractor in such a manner that the king-pin, together with the upper half a the turntable, is allowed to float between strong horizontal coil springs of square section material. These check springs are contained in cylinders, are entirely submerged in oil and can be adjusted to give the required pressure. This provides a useful flexibility between the tractor and trailer portions and thus avoids undue stresses at the joining Point,

The connection between the trailer legs and the' locking device for the tractor king-pin is effected in a very simple mannar through the medium of levers reaching above the legs and connected by rods to a cross rocking bar, to the other end of which is bolted what may be termed the key of the safety luck. The lock itself 'consists of two jaws Which, whi compressed together' against the action as their springs, are forced under the head of the king-Pin and, consequently, prevent lifting of the upper turntable. When they are in this position the jaws are secured by a special catch, but this catch cannot be lifted clear until the key, already referred to, is lifted by the dropping of the trailer legs. A square-headed screw is sitioned li along the longitudinal centre fine of 'the trailer, and this screw can be operated 'by a handle at the near side of the trailer through the medium of a pair of helical gears. On the screw is carried a sleeve nut, connecting links from which pass to the' ends of the trailer legs.

Everywhere the attachment shows clean and sturdy design. Two sets of brake shoes are provided in each rear wheel drum, and radius links take the braking stresses. These links are designed so that wear in the bearings can easily be taken up. Rebound springs are fitted above the main springs. The main frame construction obviates the necessity for using ordinary body subsills and gives a low loading line. This is effected by making the body frame an integral part ol the chassis frame, following the Dyson system embodied in the building of their standard trailers: In conclusion, we would point out that the design and original features of the Dyson attachment are thoroughly covered by patents.'