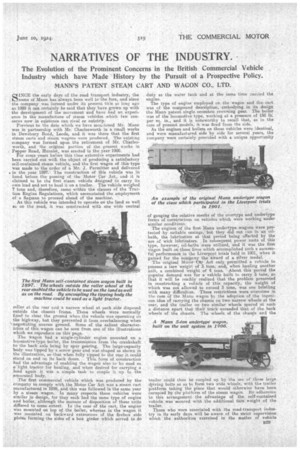 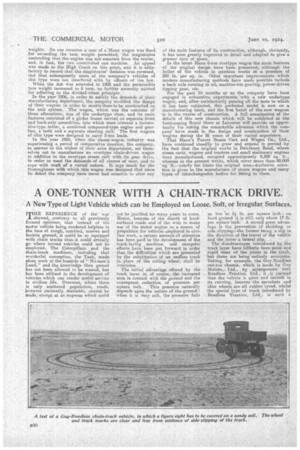 The Evolution of the Prominent Concerns in the British Commercial Vehicle Industry which have Made History by the Pursuit of a Prospective Policy.

SINCE the early days of the road transport industry, the name of Mann has always. been well to the fare, and since the company was formed under its present title so long ago as 1899 it can certainly be said that they have greavn up with the development of the movement and have had an experience in the manufacture of steam vehicles which feiv concerns now in mcistence can rival or outstrip.

Previous to the date which we have me/16(mM Mr. Mann was in partnership with Mr. Charle,sworth in a small works in Dewsbury Read, Leeds, and it was there that the first steam carts and steam wagons were produced. The existing company was formed upon the retirement of Mr. Charlesworth, and the original port-ion of the present works in Pepper Road, Hunslet, was erected in the year 1900.

For some years before this time extensive experiments had been carried out witl the °Neat of producing a satisfactoay self-contained steam vehicle, and the first wagon of this type was made to the order of a Mr. J. Permitter and delivered • in the year 1897. The construction of this vehicle was in band -before the passing of. the 'Motor par Act, and it is claimed to be the first steam vehicle designed to carry its. own load and not to haul it on a trailer. The vehicle weighed 7 tons and, therefore, came within the clauses of the Traction Engine Regulations, which necessitated the employment of a flagman to proceed ahead of the machine.

As this vehicle was intended to operate on the land as well as on the road, it Was constructed with one wide central •

roller at the rear and •a narrow wheel at each side disposed outside the chassis frame. These wheels were normally fixed to clear the ground when the vehicle was operating on the highway, but they Prevented it from overbalancmg when 'negotiating uneven ground. Some of the salient characteristics of this wagon can be seen from one of the illustrations which we reproduce on this page.

The wagon had a single-cylinder engine mounted on a locomotive-type boiler, the transmission from the crankshaft to the hack axle being by spur gearing. The large-capacity body was tipped by a screw gear and was shaped as shown in the illustration, sodhat w-hon fully tipped to the rear it could stand on end on its back doors. This form of construction had the advantage of enabling the wagon also to be used as alight tractor for hauling, and when desired for carrying a load 'again it. was a simple task to couple it up to the ,separated body.

The first commercial vehicle which was produced by the company to comply with the Motor Car Act was a steam cart. manufactured in 1898, and this was followed in the same year by a steam wagon. In many respects these vehicles were similar in design, for they each had the same type of engine end boiler, although the manner of disposition of these units differed to some extent. In the ease of the cart, the engine was mounted on top of the hailer, whereas in the wagon it was mounted on backward extensions of the firebox side plates forming the sides of a box girder which served to do

duty al the water tank and at the same time carried the engine. The type of engine employed on the wagon and the cart was of the compound description, embodying in its design_ the Mann patent single eccentric reversing gear. The boiler was of the locomotive type, working at a pressure of 150 lb: per sq in.., and it is noteworthy to recall that, as in the case 4>f present models, it was fired from the side. As the engines and boilers on these vehicles were identical, and were manufactured side by side for several years, the company were certainly provided with a unique opportunity of gauging the relative merits of the overtype and undertype forms of construction on vehicles Which were working under similar conditions.

The engines of the first Mann Undertype wagons were protected by suitable casings, but they did not Ian ii, an oil. bath, the lubrication at that period being effected by this use of wick lubricators. In subsequent power units of this type, however, oil-baths were utilized, and it was the first wagon built on these lines which a.ecamplished such a successful performance in the Liverpool trials held in 1901, when it gained for the company the award of a silver medal. The original Motor Use Act only. permitted a vehicle to possess a tare weight of 3 tons, and, when hauling another unit, a combined weight of 4 tons. About this period the popular demand was for a vehicle built to carry 5 tons, so that it will he readily realized that the problem presented in constructing a vehicle of this capacity, the weight of which was not allowed to exceed 3 tons, was one bristling with many difficulties. These restrictions were overcome in the case of the Mann wagon by the adoption of the ingenious idea of carrying the chassis on two narrow wheels at the rear, and the trailer on two similar wheels spaced at such a distance apart that their track exceeded that of the back wheels of the chassis. The wheels of the chassis and the trailer could then be coupled up by the use of three large driving bolts so as to form two wide wheels, with the trailer platform taking the place that would otherwise have been occupied by the platfcrni of the steam wagon. By adherence to this arrangement the advantage of the .self-contained vehicle was secured with the additional tare weight of the trailer.

Those who were associated with the road-transport industry in its early days will be aware of the strict supervision which the authorities exercised in the matter of vehicle 1329 weights. On one occasion a user of a Mann wagon was fined for exceeding the taro weight permitted, the magistrates contending that the engine was not separate from the trailer, and, in feet, the two constituted one machine. An appall was made to the High Court on this point, and it is satisfactory to record that the magistrates' decision was reversed, and that subsequently users of the company's vehicles of this type were not interfered with by officers of the law. When the Ace was amended in 1903 and the permissible tare weight increased to 5 tons, no further necessity existed for adhering to the divided wheelprineiele

In the year 1906, in order to satisfy the demands of their manufacturing department-, the company modified the design of their wagons in order to enable them to he constructed on the unit system. The wagon, which was the outcome of these alterations, was of the undertype class, and its mein .features consisted of a girder frame carried on separate front and back-axle assemblies, into which were lowered a locomotive-type bailer, a combined compound-type engine and gear-box, a tank and a separate steering unit. The first wagons of-this type were designed to carry 3-ton loads. In the year 1909, when the • steam-wagon industry was experiencing a period of comparative inaction, the company, in answer to the wishes of their sales departanent, set themselves out to manufacture an overtype chain-driven wagon ITI addition to the overtype steam -cart with. its gear drive, in order to meet the demands of all classes of user, and to cope with work of a varied nature. It says much for the therongline,es with which this wagon was designed that since its debut the company have never had occasion to alter any

of the main features of its construction, although, obviously, it has been greatly improved in detail and adapted to give a greater turn of speed. In the latest Mann 6-ton oyertype wagon the main features of the original design have been preserved, although the boiler of the vehicle in question works at a pressure of 200 lb. per sq. in. Other important improvements which modern, manufacturing methods have made -possible include a back axle tanning in oil, machine-Cut gearing, power-driven tipping gear, etc.

For the past 18 nionth.s or FA the company have been 'engaged in exha,uative experiments with a new undertype wagon, and, utter satisfactorily passing all the tests to which it has been subjected, this perfected model is now on "a manufacturing basis, and the first batch of the new wagons

• is in the coarse of construction. A full examination of the details of this new chassis which will be exhibited at the forthcoming Royal Show at Leicester will provide an oppoetunity for noting the remarkable advances which the COM.. pally have made in the design and construction of their wagons during the 26 years of their varied experience.

That Mann's Patent Steam Cart and Wagon Co., Ltd., have continued steadily to grow and expand is proved by the fact that the original works in Dewsbury Road, where steam carts, wagons and tractors and small stationary engines Were manufactured, occupied approximately 9,500 sq. ft., whereas in the present works, which cover more than-90,000 sq.ft, —nearly ten times the original areaexeinsive attention is given to the manufacture of steam wagons and many types of interchangeable _bodices for fitting to them.