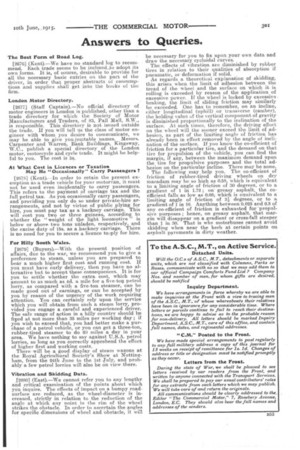 Page 21, 10th June 1915 — Answers to Queries.
Close
Noticed an error?
If you've noticed an error in this article please click here to report it so we can fix it.

[2676] (Kent).—We have no standard log to recommend. Each trade seems to be inchned_to adopt its own forms. It is, of course, desirable to provide for all the necessary basic entries on the part of the driver, in. order that proper abstracts ol consumptions and supplies shall get into the books of the firm.

[2677] (Staff Captain).—No official directory of motor engineers in London is published, other than a trade directory for which the Society ofMotor Manufacturers and Traders, of 83, Pall Mall, S.W., is responsible. This directory is not issued outside the trade. If you will tell us the class of motor engineer with whom you desire to communicate, we may be able to give you t-suitable names. Messrs. Carpenter and Warren, Bank Buildings, Kingsway, W.C., publish a special directory of the London motor, motorcycle and cycle trade. It might be helpful to you. The cost is 5s.

At What Cost in Licences or Taxation May He "Occasionally" Carry Passengers ?

[2678] (Kent).—In order to retain the present exemption as a trade vehicle for your motorvan, it must not be used even incidentally to carry passengers. This refers to the payment of carriage tax and the full petrol tax. As you occasionally carry passengers, and providing you only do so under private-hire arrangements, and not by virtue of public plying for hire, you must pay tax as a hackney carriage. This will cost you two or three guineas, according to whether the "weight of the light locomotive " is below or above two tons unladen, respectively, and the excise duty of 15s. as a hackney carriage. There is no need for you to secure a licence to.iply for hire.

[26791 (Buyers).—With the present position of affairs, due to the war, we recommend you to give a preference to steam, unless you are prepared to bear a much higher first cost and running cost. If you must have early delivery, then you have no alternative but to accept these consequences. It is for you to settle whether the extra cost, which may amount to as much as 4d. a mile for a five-ton petrol lorry, as compared with a five-ton steamer, can be made good out of earnings, or can be accepted by you by reason of the urgency of the work requiring attention. You can certainly rely upon the service which you will obtain from such a steam lorry, provided you engage a careful and experienced driver. The safe range of action in a hilly country should be fi/sed at not more than 35 miles per working day ; if you wish to exceed that, you had better make a purchase of a petrol vehicle, or you can get a three-ton, rubber-tired steamer to do 60 miles a day in your area. We have nothing to say against U.S.A. petrol lorries, so long as you correctly apprehend the effect of higher first and working costs.

There will be a good display of steam wagons at the Royal Agricultural Society's Show at Nottingham, from the 24th June to the 1st ,Tuly, and probably a few petrol lorries will also be On view ,there.

[26801 (East).—We cannot refer you to any lengthy and critical examination of the points about which you inquire. The effects of impact on a bumpy roadsurface are reduced, as the wheel-diameter is increased, strictly in relation to the reduction of the angle at which any noint in the rim of the wheel strikes the obstacle. In order to ascertain the angles for specific dimensions of wheel and obstacle, it will be necessary for you to fix upon your own data and draw the necessary cycloidal curves.. The effects of vibration are diminished by rubber tires in relation to their qualities of absorption if pneumatic, or deformation if solid.

As regards a theoretical explanation of skidding, this arises when the limit of adhesion between the tread of the wheel and the surface on which it is rolling is exceeded by reason of the application .of excessive power.. If the wheel is locked by excessive braking, the limit of sliding friction may similarly be exceeded. One has to remember, on an incline, either longitudinal (uphill) or transverse (camber); the holding value of the vertical component of gravity is diminished proportionally to the inclination of the. surface. At such times, therefore, the driving effort on the wheel will the sooner exceed the limit of adhesion, as part of the limiting angle of friction has already been in effect removed by the angle of inclination of the surface. If you know the co-efficient of friction for a particular tire, and the demand on that tire for propulsion of the vehicle, you can find the margin, if any, between the maximum demand upon the tire for propulsive purposes and the total adhesion on the particular incline. There may be none.