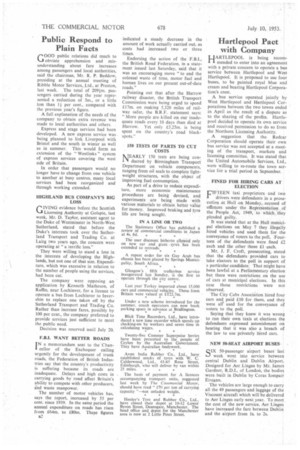 Page 28, 10th July 1953 — Hartlepool Pact with Company
Close
Noticed an error?
If you've noticed an error in this article please click here to report it so we can fix it.
Keywords : Dublin Airport, Hartlepool, G, Bus

HARTLEPOOL is being recommended to enter into an agreement with a private concern to operate a bus service between Hartlepool and West Hartlepool. It is proposed to use four buses, to be painted royal blue and cream and bearing Hartlepool Corporation's crest. A bus service operated jointly by West Hartlepool and Hartlepool Corporations between the two towns ended in April as the result of a dispute as to the sharing of the profits. Hartlepool decided to operate its own service and received permission to do so from the Northern Licensing Authority. A suggestion that the Redcar Corporation should operate their own bus service was not accepted at a meeting of the transport, markets and licensing committee. It was stated that the United Automobile Services, Ltd., were willing to re-route the town service for a trial period in September.

FINED FOR HIRING CARS AT ELECTION

FIFTEEN taxi proprietors and two drivers were defendants in a prosecution at Hull on Monday, accused of :offences under the Representation of the People Act, 1949, to which they pleaded guilty. It was stated that at the Hull municipal elections on May 7 they illegally hired vehicles and used them for the conveyance of voters to the poll. Fourteen of the defendants were fined £2 each and the other three £1 each. Mr. I. F. Croft, prosecuting, stated that the defendants provided cars to take electors to the poll in support of a particular candidate. That might have been lawful at a Parliamentary election but there were restrictions on the use of cars at municipal elections. In this case those restrictions were not observed. The City Cabs Association hired four cars and paid £10 for them, and they were alt used for the conveyance of voters to the poll. Saying that they knew it was wrong to run their own taxis at. elections the defendants expressed astonishment on hearing that it was also a breach of the law to use privately hired cars.

The vehicles are large enough to carry all the 49 passengers and luggage of the Viscount aircraft which will be delivered to Aer Lingus early next year. To meet the cost of the new service, Aer Lingus have increased the fare between Dublin and the airport from is. to 2s.