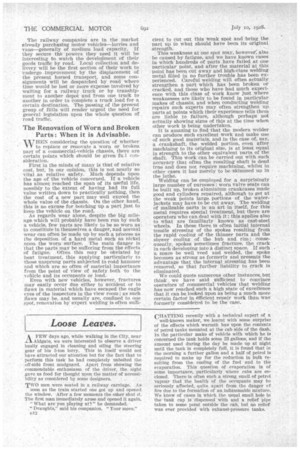 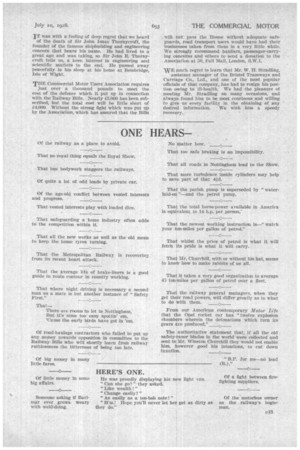 Page 66, 10th July 1928 — Loose Leaves.
Close
Noticed an error?
If you've noticed an error in this article please click here to report it so we can fix it.
Keywords : Tracked Vehicles, Associated Equipment Company, Thornycroft, Tank

A FEW days ago, while walking in the City, near ..L.A.Aldgate, we were interested to observe a driver busily engaged in cleaning and oiling the steering gear of his 5-ton lorry. This in itself would not have attracted our attention but for the fact that to perform this task he had completely unbolted the off-side front mudguard. Apart from showing the commendable enthusiasm of the driver, the sight

• ,gave us food for thought upon the matter of accessibility as considered by some designers.

TWO men were seated in a railway carriage. As soon as the train started one got up and opened the window. After a few moments the other shut it. The first man immediately arose and opened it again. " What are you playing at?" he demanded. ." Draughts," said his companion. "Your move." n12 CHATTING recently with a technical expert of a

well-known maker, we learnt with some surprise of the effects which warmth has upon the contents of petrol tanks mounted at the cab side of the dash. In the particular make Of vehicle with which he is Concerned the tank holds some 23 gallons, and if the Amount used during the day be made up at night until the tank is completely full, it is found that in the morning a further gallon and a half of petrol is required to make up for the reduction in bulk resulting from the cooling of . the fuel and to the evaporation. This question of evaporation is of some importance, particularly where cabs are enclosed. There is often such a strong smell of petrol vapour that the health of the occupants may be seriously affected, quite apart from the danger 'of fire due to the formation of an iftlianunabk mixture. We know of cases in which the, usual small hole in the tank cap is., dispensed with and 'a relief pipe taken to some point outside the cab; but no relief was ever provided with exhaust-pressure tanks. IT was with a feeling of deep regret that we heard of the death of Sir John Isaac Thornycroft, the founder of the famous shipbuilding and engineering coocern that bears his name. He had lived to a great age and was taking, so Sir John E. Thornycroft tells us, a keen interest in engineering and scientific matters to the end. He passed away peacefully in his sleep at his home at Bembridge, Isle of Wight.

THE Commercial Motor Users Association requires just over a thousand pounds to meet the cost of the defence which it put up in connection with the RailwayBills. Nearly 0,000 has been subscribed, but the total cost will be little short of i4,000. Without the strong fight which was put up by the Association, which has assured that the Bills will not pass the House without adequate safeguards, road transport users would have had their businesses taken from them in a very little while. We strongly recommend hauliers, passenger-carrying concerns and others to send a donation to the Association at 50, Pall Mail, London, S.W.1.

WE much regret to learn that Mr. W. H. Stradling, assistant manager of the Bristol Tramways and Carriage Co., Ltd., and one of the most popular officials of that company, has had to resign his position owing to ill-health. We had the pleasure of meeting Mr. Stradling on many occasions, and always found him to be most courteous and willing to give us' every facility in the obtaining of any desired information. We wish him a speedy recovery.