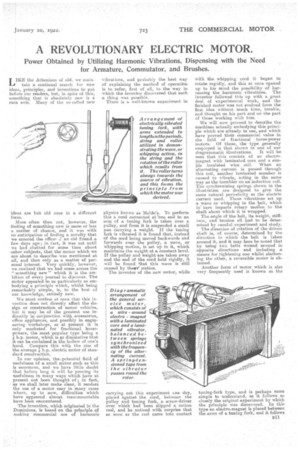 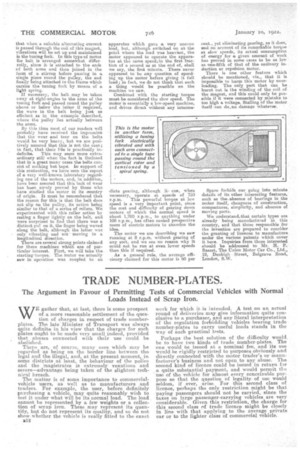 Page 9, 10th January 1922 — A REVOLUTIONARY ELECTRIC MOTOR.
Close
Noticed an error?
If you've noticed an error in this article please click here to report it so we can fix it.

Power Obtained by Utilizing Harmonic Vibrations, Dispensing with the Need for Armature, Commutator, and Brushes.

LIKE the Athenians of old, we maintain a continual search for new ideas, principles, and inventions to put before our readers, but, in spite of this, something that is absolutely new is a rare avis. Many of the so-called new

ideas are but old ones in a different form.

More often than not, however, the finding of something new is more or less a matter of chance, and it was with no anticipation of finding a novelty that we entered the officeif an old friend a few days ago; in fact, it was not until we had chatted for some time about .other subjects, that the motor which we are about to deem-floe was mentioned at all, and then only as a matter of personal interest. Very quickly, however, we realized that we had come across the "something new" which it is the ambition of every journal to discover. The motor appealed to us particularly as embodying a principle which, whilst being remarkably simple, is, to the best of our knowledge, entirely new.

We must confess at once that this invention does not directly affect the design or construction of motor vehicles, but it may be of the greatest use indirectly in conjunction with accessories, office appliances, and possibly in engineering workshops, as at present it is only marketed for fractional horsepowers, the most popular type being a

h.p. Motor, which is so diminutive that it can be contained in the hollow of one's hand. Compare this with the size of the average .1, h.p. electric motor of standard construction.

In our opinion, thepotential field of usefulness of a small motor such as this is enormous, and we have little doubt that before long it will be proving its usefulness in many ways which have at present not been thought of ; in fact, as we shall later make clear, it renders the use of a motor easy in many cases where, up to now, difficulties which have appeared almost insurmountable have been encountered.

The invention, which originated in the Dominions, is based on the principleof making commercial use of harmonic vibrations, and probably the best way of explaining the method of operation is to refer, first of all, to the way in which the inventor discovered that such a thing was possible. There is a well-known experiment in physics known as Melds's. To perform this a cord connected at one end to an arm of a tuning fork is taken over a pulley, and from it is suspended a small pan carrying a weight. If the tuning fork is vibrated it is found that, instead of the cord being moved backwards and forwards over the pulley, a wave, or whipping motion, is set up in it, which maintains the weight at a constant level. If the pulley and weight are taken away and the end of the cord held rigidly, it will be found +1st this wave is still caused by their' yration. The inventor of the new motor, while

carrying out this experiment cue day, placed against the cord, between the pulley and tuning fork, a screw-driver over which had been slipped a cotton reel, and he noticed with surprise that so soon as the reel came into contact

with the whipping cord it began to rotate rapidly, and this at once opened up to his mind the possibility of harnessing the harmonic vibrations. The inventor followed this up with a great deal of experimental work, and the finished motor was not evolved from the first idea without much time, trouble, and thought on his part and on the part of those working with him.

We will now proceed to describe the machines actually embodying this principle which are already in use, end which have proved their commercial value in the field of fractional horse-power motors. Of these, the type generally employed is that shown in one of our diagrammatic illustrations. It will be seen that this consists of an electromagnet with laminated core and a aimfile insulated wire coil. When an alternating current is passed through this coil, another laminated member is caused to vibrate, acting in the same way as the trembler on an induction coil. The synchronizing springs shown in the illustration are designed to give the same natural periodicity as the electric current used. These vibrations set up a wave or whipping in the belt, which in' turn imparts rotary motion to the shaft about which it is wrapped.

The angle of the belt, its weight, stiffness, and tension all had to be determined by careful experiment and study.

The direction of rotation of the driven shaft is, of course, determined by the direction in which the belt is taken around it, and it may here be noted that by Using two belts wound around in .opposite directions and including a means for tightening one whilst slackening the other, a reversible motor is obtained.

Another form of motor which is also very frequently used is known as the tuning-fork type, and is perhaps more simple to understand, as it follows so closely the original experiment by which the principle was discovered. In this type an electro-magnet is placed between the arms of a tuning fork, and it follows that when a suitable alternatiug current is passed through the coil of this magnet, vibrations will be set up and maintained in the tuning fork. In this type of motor the belt is arranged somewhat differ since it is attached to the ends of both arms and then joined in the form of a stirrup before passing in a single piece round the pulley, the end finally being attached to the frame which carries the tuning fork by means of a light spring.

If necessary, the belt may be taken away at right-angles to the arms of the tuning fork and passed round the pulley above or below the latter if required, the wave in the belt being just as efficient as in the egample described, where the pulley lies actually between the arms.

By this time most of our readers will probably have received the impression that the wear and tear on the belts would be vary heavy, but we are positively assured that this is not the case; in fact, that their life is practically indefinite. This may seem more extraordinary still when the fact ia iisclosed that in a great many cases the belts consist of nothing but tapsi. In support of this contention, we have seen the report of a very well-known laboratory regarding one of the motors, and, in addition, have been assured that this lack of wear has been areoly proved by those who have studied the motor in its country of origin. It must be remembered that the reason for this is that the belt does not slip on the pulley, its action being similar to that of a series of rollers. We experimented with this roller action by resting a finger lightly on the belt, and were surprised to find that there was a distinct put on it, the finger being waved along the belt, although the latter was only vibrating and not • moving in a longituelinal direction.

There are several strong points claimed for these machines which are of particular interest. First, we will take the starting.torque. The motor we actually saw in operation was coupled to an apparatus which gave a very uneven load, but, although switched on at the point where the load was heaviest, the motor appeared to operate the apparatus at the same speed:in the first fraction of a second as at the end of, shall we say, the first minute. There never appeared to be any question of speeding up the motor before giving it full load; in fact, we do not thmk that such a thing would be possible on the machine we saw.

Combined with the starting torque must be considered the slow speed. The motor is essentially a low-speed machine, and drives direct without any intermea cliate gearing, although it. can, when necessary, operate at speeds of 750 r.p.m. This powerful torque at low speed is a very important point, since the cost and difficulty of gearing down motors of which the normal speed is about 1,700 r.p.m., to anything under 100 r.p.m., has often cauled prospective users of electric motors to abandon the idea.

The motor we are describing we saw running at 8 r.p.m. without gearing of any sort, and we see no reason why it couldnot be run at even lower speeds than this if required.

As a general rule, the average efficiency claimed for this motor is 60 per

cent., yet eliminating gearing, as it does, and on account of its remarkable torque at slow speeds, its actual consumption of energy for a given amount of work has proved in some cases to be as low as one-fifth of that of the ordinary induction or repulsion motor.

There is one other feature which • should be mentioned, viz., that it is impossible to harm this motor by overloading. The only part that can he burnt out is the winding of the coil of the magnet, and this could only be possible if it were connected by mistake to too high a voltage. Stalling of the motor itself can do,no damage whatever.

Spare forbids our going into minute details of its other interesting features, such as the. absence of bearings in the motor itself, cheapness of construction, compactness, simplicity, and absence of moving parts.

We understand,that certain types are i

already being manufactured n this country, and that those responsible for the invention are prepared to consider the granting of licences to manufacture under the various patents which cover it here. Inquiries from those interested should be addressed to Mr. H. F. Basset, The Union Motor Car Co., Ltd-, 19, Denbigh Street, Belgrave Road, London, S.W.