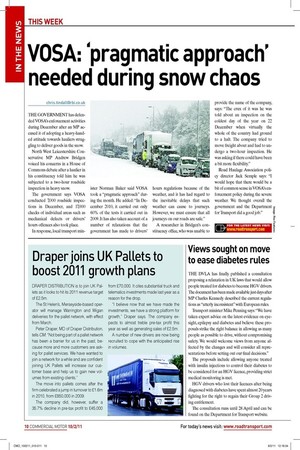 Page 8, 10th February 2011 — VOSA: ‘pragmatic approach’ needed during snow chaos
Close
Noticed an error?
If you've noticed an error in this article please click here to report it so we can fix it.
Keywords : Vehicle And Operator Services Agency, Department For Transport, Politics

chris.tindall@rbi.co.uk THE GOVERNMENT has defended VOSA’s enforcement activities during December after an MP accused it of adopting a heavy-handed attitude towards hauliers struggling to deliver goods in the snow.

North West Leicestershire Conservative MP Andrew Bridgen voiced his concerns in a House of Commons debate after a haulier in his constituency told him he was subjected to a two-hour roadside inspection in heavy snow.

ister Norman Baker said VOSA took a “pragmatic approach” during the month. He added: “In December 2010, it carried out only 60% of the tests it carried out in 2009. It has also taken account of a number of relaxations that the government has made to drivers’ hours regulations because of the weather, and it has had regard to the inevitable delays that such weather can cause to journeys. However, we must ensure that all journeys on our roads are safe.” A researcher in Bridgen’s constituency ofice, who was unable to provide the name of the company, says: “The crux of it was he was told about an inspection on the coldest day of the year on 22 December when virtually the whole of the country had ground to a halt. The company tried to move freight about and had to undergo a two-hour inspection. He was asking if there could have been a bit more lexibility.” Road Haulage Association policy director Jack Semple says: “I would hope that there would be a bit of common sense in VOSA’s enforcement policy during the severe weather. We thought overall the government and the Department for Transport did a good job.”