Anthony M. Wortley has been appointed divisional traffic superintendent for 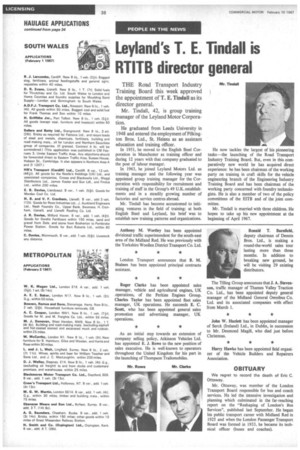 the south-east area of the Midland Red. He was previously with the Yorkshire Woollen District Transport Co. Ltd.

London Transport announces that B. M. Staines has been appointed principal contracts assistant.

As an initial step towards an extension of company selling policy, Atkinson Vehicles Ltd. has appointed E. J. Rowe to the new position of sales executive. He is well-known to operators throughout the United Kingdom for his part in the launching of Thompson Trailomobiles.

The Tilling Group announces that J. A. Stevenson, traffic manager of Thames Valley Traction Co. Ltd., has been appointed deputy general manager of the Midland General Omnibus Co. Ltd. and its associated companies with effect from March 1.

John W. Hazlett has been appointed manager of Serck (Ireland) Ltd., in Dublin, in succession to Mr. Desmond Magill, who died just before Christmas.

Harry Hawke has been appointed field organizer of the Vehicle Builders and Repairers Association.

We regret to record the death of Eric C. Ottaway.

Mr. Ottaway, was member of the London Transport Board responsible for bus and coach services. He led the intensive investigation and planning which culminated in the far-reaching report on the "Reshaping of London's Bus Services", published last September. He began his public transport career with Midland Red in 1925 and when the London Passenger Transport Board was formed in 1933, he became its technical officer (buses and coaches).