OMISSION IN ACT HALTS AN APPEAL BY HAULIER 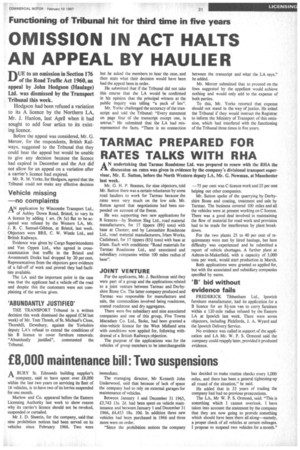 Page 33, 10th February 1967 — OMISSION IN ACT HALTS AN APPEAL BY HAULIER
Close
Noticed an error?
If you've noticed an error in this article please click here to report it so we can fix it.
Keywords : Public Inquiry, Appeal, Australian Courts, Law / Crime

-nUE to an omission in Section 176

of the Road Traffic Act 1960, an appeal by John Hodgson (Haulage) Ltd. was dismissed by the Transport Tribunal this week.

Hodgson had been refused a variation to its A licence by the Northern LA, Mr. J. Hanlon, last April when it had sought to add four artics to its existing licence.

Before the appeal was considered, Mr. G. Mercer, for the respondents, British Railways, suggested to the Tribunal that they could hear the appeal but would be unable to give any decision because the licence had expired in December and the Act did not allow for an appeal on a variation after a carrier's licence had expired.

Mr. R. M. Yorke, for Hodgson, agreed that the Tribunal could not make any effective decision

AN application by Wincombe Transport Ltd.,

of Ashley Down Road, Bristol, to vary its A licence by adding l art. (9t 5c) flat to be acquired was refused by the Western LA, Mr. J. R. C. Samuel-Gibbon, at Bristol, last week. Objectors were BRS, C. W. Whale Ltd., and British Railways.

Evidence was given by Cargo Superintendents and Van Oppen Ltd., who agreed in crossexamination that traffic in the Bristol and Avonmouth Docks had dropped by 20 per cent. Representatives from the objectors gave evidence of a fall-off of work and proved they had facilities available.

The LA said the important point in the case was that the applicant had a vehicle off the road and despite this the customers were not complaining of the service given.

THE TRANSPORT Tribunal in a written decision this week dismissed the appeal (CM last week) of Mr. Tom Thresh, of St. Michael's Close, Thornhill, Dewsbury, against the Yorkshire deputy LA's refusal to extend the conditions of his B licence to cover furniture removals. "Abundantly justified", commented the Tribunal. but he asked the members to hear the case, and then state what their decision would have been had the appeal been in order.

He submitted that if the Tribunal did not take this course that the LA would be confirmed in his opinion that the principal witness at the public inquiry was telling "a pack of lies".

Mr. Mercer submitted that to proceed on the lines suggested by the appellant would achieve nothing and would only add to the expense of both parties.

To this, Mr. Yorke retorted that expense should not stand in the way of justice. He asked the Tribunal if they would instruct the Registrar to inform the Ministry of Transport of this omission, which had interfered with the functioning of the Tribunal three times in five years.