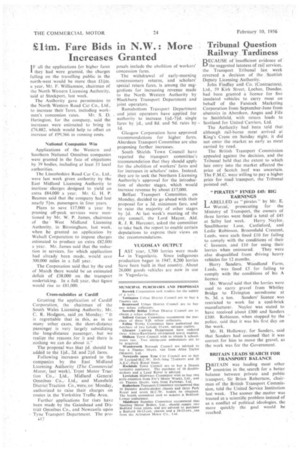 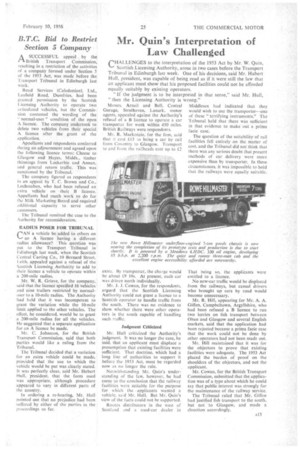 IF all the applications for higher fares they had were granted, the charges falling on the travelling public in the north-west would be more than film. a year, Mr. F. Williamson, chairman of the North Western Licensing Authority, said at Stockport, last week.

The Authority gave permisssion to the North Western Road Car Co., Ltd., to increase their Tares, including work men's concession rates. Mr. S. D. Herington, for the company, said the increases were estimated to bring in £76.882, which would help to offset an increase of £99,366 in running costs.

National Companies Win Applications of the Western and Southern National Omnibus companies were granted in the face of objections by 39 bodies, including at least 33 local authorities.

Plans to save £17,000 a year by pruning off-peak services were mentioned by Mr. W. P. James, chairman of the • West Midland Licensing Authority. in Birmingham, last week. when he granted an application by Walsall Corporation to impose charges estimated to produce an extra £82.000 a year. Mr. James said that the reduction in services, for which application had already been made, would save 300.000 miles in a full year.

The Corporation said that by the end of March there would be an estimated deficit of £38,000 on the transport undertaking. In a full year, that figure would rise to £81,000.

Granting the application of Cardiff Corporation, the chairman of the South Wales Licensing Authority, Mr. C R. Hodgson, said on Monday: "It is regrettable that in this, as in so many -other cases, the short-distance passenger is very largely subsidizing the long-distance passenger, but sve realize the reasons .for it and there is nothing we can do about it."

Further applications for rises have been made by the Gateshead and District Omnibus Co., and Newcastle upon Tyne Transport Department. The pro

posals include the abolition of workers' concession fares.

The withdrawal of early-morning concessionary returns, and scholars' special return fares, is among the suggestions for increasing revenue made to the North Western Authority by Blackburn Transport Department and joint operators.

Ramsbottom Transport Department and joint operators have applied for authority to increase 114.-70. single fares by id., and 8d. and 9d. rates by s Id.

South Shields Town Council have rejected the transport committee's recommendation that they should apply for the abolition of workers' fares and for increases in scholars' rates. Instead, they are to seek the Northern Licensing Authority's approval for the introduction of shorter stages, which would increase revenue by about £17,000.

Belfast Transport Committee, on .Monday, decided to go ahead with their proposal for a 3d. minimum fare, and to raise the majority of other stages by fd. At last week's meeting of the city council, the Lord Mayor, Aid. R. J. R. Harcourt, asked the committee to take back the report to enable certain deputations to express their views on the recommendations.

LAST year, 1,700 lorries were made LA in Yugoslavia. Since indigenous production began in 1947. 8,200 lorries have been built in that country. About 26,000 goods vehicles are now in use in Yugoslavia.

BECAUSE of insufficient evidence of the suggested lateness of rail services, the Transport Tribunal last week reversed a decision of the . Scottish Deputy Licensing Authority.

John Findlay and Co. (Contractors), Ltd., 59 Kirk Street, Lochec, Dundee, had been granted a licence for five insulated vehicles to carry meat on behalf of the Fatstock Marketing Corporation from September-June from abattoirs in Aberdeen, Angus and Fife to Smithfield, with return loads to Scotland for United Carriers, Ltd.

The Authority had been told that although rail-borne meat arrived at King's Cross on Sunday night, it did not enter the market as early as meat carried by road.

The British Transport Commission appealed against the decision. and the Tribunal held that.the extent to which late entry into the market affected the price of Scotch beef was uncertain. The F.M.C. were willing to pay a higher price for road transport, the Tribunal pointed out.

I ABELLEDas" pirates " by Mr. E. Wurzal, prosecuting for the Ministry of Transport, the owners of three lorries were fined a total of £45

at Selby last week. Harry Naylor, Sinallthorne Lane, Castleford, and Leslie Robinson. Broomfield Crescent, Leeds. were each fined £10 for failing to comply with the conditions of their C licences, and £10 for using their lorries when uninsured. They were also disqualified from driving heavy vehicles for 12 months.

Harry Sanders, Woodland Farm, Leeds, was fined £5 for failing to. comply with the conditions of his A

Mr. WurzaI said that the lorries were used to carry gravel from Whitley Bridge to Elvington aerodrome at

9s. 3d, a ton. Sanders' licence was restricted to work for a coal-brick manufacturer. Naylor was stated to have received about £300 and Sanders £100. Robinson. when stopped by the police, said that it was his first day on the work.

Mr. H. Holloway. for Sanders, said that Sanders had assumed that it was correct for him to move the gravel, as the work was for the Government.

BRITAIN LEADS SEARCH FOR TRANSPORT BALANCE RITAIN was leading most other

countries in the search for a better balance between private and public transport, Sir Brian Robertson, chairman of the British Transport Commission, told the United Service Institution last week. The sooner the matter was treated as a scientific problem instead of as a conflict of political ideologies, the more quickly the goal would be reached.

A SUCCESSFUL appeal by the I–I British Transport Commission, resulting in a restriction of the activities of a company formed under Section 5 of the 1953 Act, was made before the Transport Tribunal in Edinburgh last vvcck.

Road Services (Caledonian), Ltd., Leafield Road, Dumfries, had been granted permission by the Scottish Licensing Authority to operate two articulated vehicles, but the Commission contested the wording of the normal-user" condition of the open A licence. The company undertook to delete two vehicles from their special A licence after the grant of the application.

Appellants and respondents conferred during an adjournment and agreed upon the following licence terms: Cheese to Glasgow and Hayes, Middx., timber thinnings from Lockcrbie arid Annan, and general return traffic. This was sanctioned by the Tribunal.

The company figured as respondents in an appeal by T. C. Brown and Co., Lochmaben, who had been refused an extra vehicle on their B licence. Appellants had much work to do for the Milk Marketing Board and required additional capacity to serve other customers.

The Tribunal remitted the case to the Authority for reconsideration.

RADIUS POSER FOR TRIBUNAL rAN a vehicle be added to others on an A licence having a different radius allowance? This question was put to the Transport Tribunal in Edinburgh last week, when the Scottish Central Carting Co., 10 Bernard Street, 1 eith, appealed against a refusal of the Scottish Licensing Authority to add to their licence a vehicle to operate within a 200-mile radius.

Mr. W. R. Grieve, for the company, said that the licence specified 16 vehicles and nine trailers restricted by normaluser to a 10-mile radius. The Authority had held that it was incompetent to grant the variation while the 10-mile limit applied to the other vehicles. The effect, he considered, would be to grant a 200-mile radius for all the vehicles. He suggested that a separate application for an A licence be made.

Mr. C. Johnston, for the British Transport Commission, said that both parties would like a ruling from the Tribunal.

The Tribunal decided that a variation for an extra vehicle could be made, provided that the use to which the vehicle would be put was clearly stated. It was perfectly clear, said Mr. Hubert Hull, president, that the form used was appropriate, although procedure appeared to vary in different parts of the country.

lri ordering a re-hearing, Mr. Hull pointed out that no prejudice had been suffered by either of the parties in the proceedings so far.