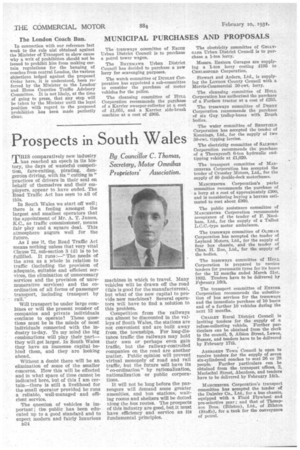 Page 86, 10th February 1931 — MUNICIPAL PURCHASES AND PROPOSALS
Close
Noticed an error?
If you've noticed an error in this article please click here to report it so we can fix it.

The tramways committee of FRITH Urban District Council is to purchase a petrol tower wagon.

The BRYNMAWR Urban District Council has decided to purchase a new lorry for scavenging purposes.

The watch committee of Dunr..nv Corporation has appointed a sub-committee to consider the purchase of motor vehicles for the police.

Stewart and Ardern, Ltd., is supplying the LONDON County Council with a Morris-Commercial 30-cwt. lorry.

The cleansing committee of Him, Corporation has authorized the purchase of a Fordson tractor at a cost of £255.

The tramways committee of DERBY Corporation recommends the purchase of six Guy trolley-buses with Brush bodies.

The water committee of SHEFFLELD Corporation has accepted the tender of Kennings, Ltd., for the supply of two 30-cwt. tipping lorries.

The electricity committee of SALFORD Corporation recommends the purchase of a Thornycroft 6-ton hydraulic endtipping vehicle at £1,020.

The transport committee of MANCHESTER Corporation has accepted the tender of Crossley Motors, Ltd., for the supply of 40 double-deck motorbuses.

MANCHESTER Corporation's parks committee recommends the purchase of a lorry at a cost of approximately £300, and is considering buying a boxvan estimated to cost about £360.

The public assistance committee of MANCHESTER Corporation recommends acceptance of the tender of F. Needham, Ltd., for the supply of a Talbot L.C.C.-type motor ambulance.

the bodies. 1 The tramways committee of Hon; Corporation is prepared to receive tenders for pneumatic tyres for its buses for the 12 months ended March 31st, 1932. Tenders have to be delivered by February. 16th.

The transport committee of EXETER Corporation recommends the substitution of bus services for the tramways and the immediate purchase of 10 buses and of a further 10 vehicles during the next 12 months.

CHAILEY Rural District Council is inviting tenders for the supply of a refuse-collecting vehicle. Further par. ticulars can be obtained from the clerk to the council, 9, Albion Street, Lewes, Sussex, and tenders have to be delivered by February 17th.

ABERDEEN Town Council is open to receive tenders for the supply of seven six-cylindered coaches to seat 26 or 28 people. Further particulars can be obtained from the transport offices, 2, Marischk1 Street, Aberdeen, and tenders have to be delivered by February 14th.

MAiecuEsTma Corporation's transport committee has accepted the tender of the Daimler Co., Ltd., for a bus chassis, equipped with a Fluid Flywheel and pre-selective gear ; and that of Thompson Bros. (Bilston). Ltd., of Bilston (Staffs), for a. tank for the conveyance of petrol.