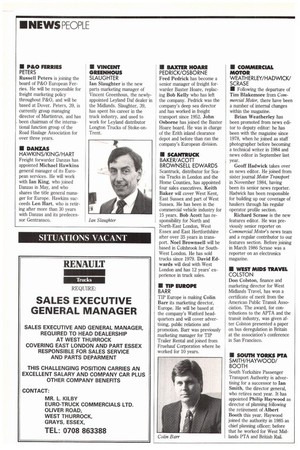 Page 64, 10th December 1987 — • COMMERCIAL MOTOR WEATHERLEY/HADWICK/ SCRASE • Following the departure of
Close
Noticed an error?
If you've noticed an error in this article please click here to report it so we can fix it.
Keywords : Entertainment / Culture

Tim Blakemore from Commercial Motor, there have been a number of internal changes within the magazine.

Brian Weatherley has been promoted from news editor to deputy editor: he has been with the magazine since 1978, when he joined as staff photographer before becoming a technical writer in 1984 and news editor in September last year.

Geoff Hadwick takes over as news editor. He joined from sister journal Motor Transport in November 1984, having been its senior news reporter. Hadwick has been responsible for building up our coverage of hauliers through his regular operator profile section.

Richard Scrase is the new features editor. He was previously senior reporter on Commercial Motor's news team and a regular contributor to our features section. Before joining in March 1986 Scrase was a reporter on an electronics magazine.