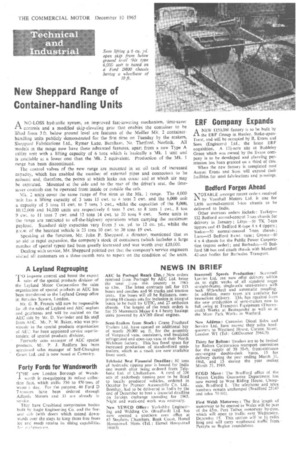 Page 41, 10th December 1965 — New Sheppard Range of Container-handling Units
Close
Noticed an error?
If you've noticed an error in this article please click here to report it so we can fix it.
Keywords : Business / Finance

I-1 A NO-LOSS hydraulic system, an improved fast-lowering mechanism, time-saver

controls and a modified skip-elevating gear that enables the container to be lifted from 3 ft. below ground level are features of the Meiller Mk. 2 containerhandling units publicly demonstrated for the first time on Tuesday by the makers, Sheppard Fabrications Ltd., Rymer Lane, Barnham, Nr. Thetford, Norfolk. All models in the range now have these advanced features, apart from a new Type A utility unit with a lifting capacity of 6 tons which is basically a Mk. 1 unit and is available at a lower cost than the Mk. 2 equivalent. Production of the Mk. 1 range has been discontinued.

The control valves of the new range are mounted in an oil tank of increased capacity, which has enabled the number of external pipes and connectors to be reduced and, therefore, the points at which leaks can occur and at which air may be aspirated. Mounted at the side and to the rear of the driver's seat, the timesaver controls can be operated from inside or outside the cab.

Speaking at the function, Mr. John P. Sheppard, a director, mentioned that as an aid to rapid expansion, the company's stock of containers (which includes a large number of special types) had been greatly increased and was worth over £20,000.

Dealing with service, Mr. Sheppard pointed out that the company's service engineers visited all customers on a three-month rota to report on the condition of the units.