Tillings have started a new longdistance horsed-bus service, between Lewisham and Shoreditch, via Rotherhi the and the Tower Bridge. 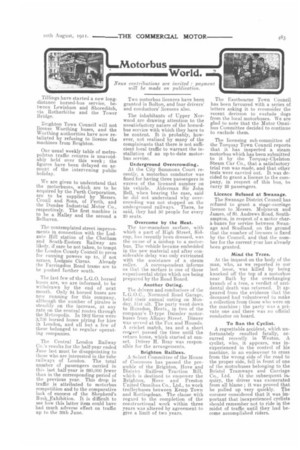 Page 7, 10th August 1911 — Tillings have started a new longdistance horsed-bus service, between Lewisham and Shoreditch, via Rotherhi the and the Tower Bridge.
Close
Noticed an error?
If you've noticed an error in this article please click here to report it so we can fix it.
Keywords : Brighton And Hove, Monarch's Way, Swanage, Brighton, Hove, Worthing, Tram

Brighton Town Council will not license Worthing buses, and the Worthing authorities have now retaliated by refusing to license the machines from Brighton.

Our usual weekly table of metropolitan traffic returns is unavoidably held over this week ; the figures have been delayed on account of the intervening public holiday.

We are given to understand that the motorbuses, which are to be acquired by the Perth Corporation, are to be supplied by Messrs. Croall and Sons, of Perth, and the Dundee Industrial Motor Co., respectively. The first machine is to be a Halley and the second a Belhaven.

The contemplated street improvements in connection with the Ludgate Hill station of the Chatham and South-Eastern Railway are likely, if care be not taken, to tempt the London County Council to press for running powers up to, if not across, Ludgate Circus, Already the Farringdon Road trams are to be pushed farther south.

The last few of the L.G.O. horsed buses are, we are informed, to be withdrawn by the end of next month. Only 94 horsed buses are now running for this company, although the number of pirates is steadily on the increase, at any rate on the central routes through the 'Metropolis. In 1902 there were 3,736 horsed buses plying for hire in London, and all but a few of these belonged to regular operating companies.

The Central London Railway Co.'s results for the half-year ended June last must be disappointing to those who are interested in the tube railways of London. The total number of passengers carried in this last half-year is 060,000 fewer than in the corresponding period of the previous year. This drop in traffic is attributed to motorbus competition and to the comparative lack of success of the Shepherd's Bush Exhibition. It is difficult to see how this latter item could have had much adverse effect on traffic up to the 30th June.

Two motorbus licences have been granted in Bolton, and four drivers' and conductors' licences also.

The inhabitants of Upper Norwood are drawing attention to the unsatisfactory nature of the horsedbus service with which they have to be content. It is probably, however, not realized by many of the complainants that there is not sufficient local traffic to warrant the installation of an up-to-date motorbus service.

At the City Summons Court recently, a motorbus conductor was fined for having three passengers in excess of the licensed number on his vehicle. Alderman Sir John Bell, when hearing the case, said he did not understand why overcrowding was not stopped on the underground railways. There, he said, they had 50 people for every 20 seats.

Overcome by the Heat.

The tar-macadam surface, with which a part of High Street, Sidcup, has recently been dressed, was the cause of a mishap to a motorbus. The vehicle became embedded in the new material and after considerable delay was only extricated with the assistance of a steam roller. A correspondent informs us that the surface is one of those experimental strips which are being prepared by the Road Board.

The drivers and conductors of the L.G.O.C., Normand Road Garage, held their annual outing on Monday. 31st ult. The party went. down to Hunsdon, Herts., in two of the company's D-type Daimler motorbuses from Albany Street.. Dinner was served at the Fox and Hounds. A cricket match, tea and a short covert passed the time until the return home, which started at sunset. Driver H. Bray was responsible for the arrangements.

A Select Committee of the House of Commons has passed the preamble of the Brighton, Hove and District Railless Traction Bill, which is destined in empower the Brighton, Hove and Preston United Omnibus Co., Ltd., to work trolleybuses between Kemp Town and Rottingdean. The clause with regard to the completion of the constructional work within three years was altered by agreement to give a limit of two years. The Eastbourne Town Council has been favoured with a series of letters asking it to reconsider the recent decision to exclude dogs from the local motorbuses. We are glad to note that the Motor Omnibus Committee decided to continue to exclude them.

The licensing sub-committee of the Torquay Town Council reports that it has inspected a steam motorbus which has been submitted to it by the Torquay-Chelston Steam Car Co., that a satisfactory trial run was made, and that other tests were carried out. It was decided to grant a licence to the company, in respect of this bus, to carry 20 passengers.

The Swanage District Council has refused to grant a stage-carriage licence to Messrs. Molyneux and James, of St. Andrews Road, Southampton, in respect of a motor chara-bancs for service. between Swanage and Studland, on the ground that the number of licences is fixed by the Council, and that the number for the current year has already been granted.

At the inquest on the body of the man, who, as we reported in our last issue, was killed by being knocked off the top of a motorbus near Bath by the overhanging branch of a tree, a verdict of accidental death was returned. It appeared from the evidence that the deceased had volunteered to make a collection from those who were on the machine ; the party was a private one and there was no official conductor on board.

To Ban the Cyclist.

A regrettable accident, which unfortunately resulted fatally, occurred recently in Weston. A cyclist, who, it appears, was inexperienced in the control of his machine, in an endeavour to cross from the wrong side of the road to the proper side, fell in front of one of the motorbuses belonging to the Bristol Tramways and Carriage Co., Ltd. At the subsequent ins quiry, the driver was exonerated from all blame ; it was proved that he pulled up very quickly. The coroner considered that it was important that inexperienced cyclists should remember not to ride in the midst of traffic until they had become accomplished riders.